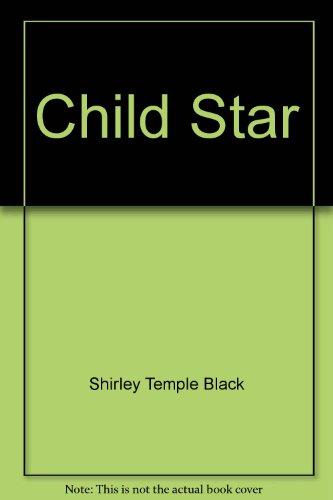 Shirley Temple. She was a curly-topped moppet with a saucy grin that lit up the screen and an irrepressible spirit that won America's heart. But what was life really like for this extraordinary child growing up on the back lots and sound stages of Hollywood? This BOMC alternate reveals the ups and downs of stardom at age four and tells the funny, poignant, heartwarming chronicle of Shirley's journey to the pinnacle of stardom. A New York Times bestseller. HC: McGraw Hill. (Nonfiction)

In this candid, poised, resilient autobiography, Shirley Temple Black tells what it was like to be a child star adored by millions during the Depression '30s and the 1940s. Fox's cleverly worded movie contracts, poorly understood by her father, held a financial truncheon over her curly head. Studio bigwigs who molded her image demanded that her 14-year-old bust be bound flat. She had to submit weekly urine samples to satisfy Lloyd's of London, underwriters of her pricey insurance policies. Her fretful parents feared she would be kidnapped. Life was a "daily joyous contagion of filmmaking," from which she partially rebelled by marrying, at age 17, Jack Agar, a hard-drinking army man. Divorced and on the rebound, she fell for a pineapple company employee, Charlie Black, to whom she has been married ever since. She ends this Hollywood memoir in 1954 with the birth of their second daughter, thus omitting her recent career as a diplomat and stateswoman. It's a funny, poignant look at the price of fame, studded with sparkling on- and off-the-set anecdotes. First serial to the National Enquirer; Movie/Entertainment Book Club selection.
Copyright 1988 Reed Business Information, Inc.

The famous child star's memoir, written close on the heels of Anne Edwards's Shirley Temple: American Princess (LJ 9/1/88). Unfortunately, Edwards's account, though not wholly satisfying, is livelier and more dramatic than Temple's own. Temple is comprehensive, however, covering her rise to stardom, her indomitable mother, her early marriage to an alcoholic and abusive husband, her eventual finding of true love, and her career skidding downwards. The story ends in 1953, so there may be more to come. Though it sounds sincere, there is something missing. Perhaps the breathy, sometimes cutesy tone grates or perhaps the reader senses that the soul isn't really bared. Temple's book seems to be a paean to her mother; in Edwards's book, the section on the domineering Mrs. Temple is unflattering, but the most successful part. All the same, count on requests. Rosellen Brewer, Monterey Cty. Lib., Seaside, Cal.
Copyright 1988 Reed Business Information, Inc.