Items related to Straight Into Darkness 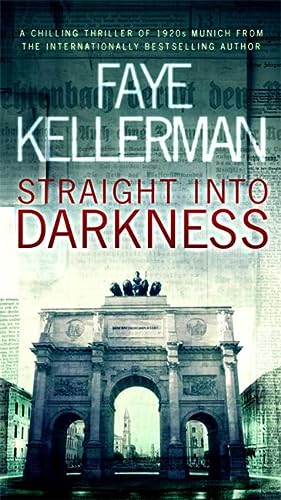 In the latest entry in the Peter Decker-Rina Lazarus series, New York Times bestselling author Faye Kellerman takes us on an edge-of-the-seat journey to the past, and a city stalked by a killer so ruthless no one is safe-not even the police.

FAYE KELLERMAN is the author of the bestselling Peter Decker/Rina Lazarus novels, as well as a thriller, Moon Music, and a historical novel, The Quality of Mercy. She lives in Los Angeles with her husband, Jonathan Kellerman, and their children.

Faye Kellerman has reached beyond her Peter Decker/Rina Lazarus mysteries to create an intricate historical mystery set in 1929. Axel Berg, a Munich police inspector, doggedly seeks justice amidst the anarchy and passions stirred by Hitler's Brown Shirts. Although he is directed to blame recent murders on the Jews, Berg--a complex, flawed protagonist--doggedly pursues the real murderer, placing his job and his family at risk. Kellerman, no stranger to religious themes, provides a moral lesson within her story, particularly in the novel's coda. Paul Michael, who excels in European accents, does an outstanding job carrying both the plot's momentum and the protagonist's psychological burden. R.W.S. © AudioFile 2006, Portland, Maine-- Copyright © AudioFile, Portland, Maine

Book Description Headline Book Publishing, 2006. Paperback. Condition: New. This book is in stock now, in our UK premises. Photos of most of our books are available - please ask, as dustjacket and cover illustrations vary, and unless the accompanying image is marked 'Bookseller Image', it is an Abebooks Stock Image, NOT our own. Overseas buyers also note that shipping rates apply to packets of 750g and under, and should the packed weight of an item exceed this we reserve the right to ship via 'Economy', or request extra postage prior to fulfilling the order, or cancel. Seller Inventory # mon0000094831