Items related to Stranger In Paradise 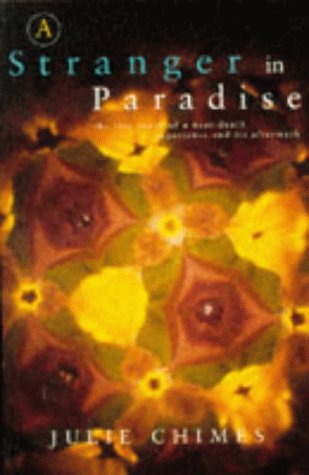 This is an autobiographical work based on a kaleidoscope of events that happened to me, a working, fun-loving woman, whose life was almost ended as a result of an 'out of the blue' vicious and frenzied stabbing. It is an extraordinary story, told from the unusual perspective of the one who was supposed to be dead. For, in the midst of attempted murder, I had discovered a place filled with love, compassion, light, laughter and excitement, a place so vast it contained all of creation in its arms. I found that not only does God exist but He also has a wonderful sense of humour, and although I could never change what happened to me, I could change my attitude. Within that lay the miracle of my recovery. At the time of fighting for my physical life, I cried out to God to save me. I believed I was alone, life was unfair, and God was a myth markeyed by religious zealots. Thanks to my many experiences, I have discovered that He was in fact with me all the way.

One cold March morning, a young woman lay dying of multiple stab wounds on her own driveway. She came through the nightmare that followed, laughing. This book describes what happened in graphic and mesmerising detail, and with startling clarity.

While hers is no 'tinkly bells' tale, Julie Chimes tells of her out-of-body experiences during the cricis, as well as dreams and premonitions leading up to it, with startling directness. She recounts the frezied attack by a paranoid schizophrenic, a woman off her controlling medicine, with horrific immediacy and enlightened understanding. She offers vivid answers to questions seldom asked about the way we treat victims of violence and the mentally ill. Unforgettably, she describes what it feels like to die, and then, unforseeably, to live to tell the tale.

This is a multi-faceted real life drama; a story of crime due to mental illness; a story about survival; the battle to regain physical and mental well-being; a woman's quest for truth; an account of false accusation and injustice; an adventure far beyond the confines of a physical body; a humorous narrative of a voyage through our supposedly caring and free-speaking society - a society where justice is very often directly proportional to the amount you can afford to pay your lawyer. It is ultimately, the story of a spiritual awakening. And it is dynamite.

I wanted to call this book, 'I laughed, I cried, I nearly died, but the publisher felt that would sound too much like a rugby song! Interestingly, over the years since the book has been in print, this is the phrase I receive freqently in letters from readers around the world.

I was amazed at how much mainstream publicity the story attracted and saddened at how often editors would publish copy which eliminated all the humour and spiritual experience, leaving only the shocking gruesome details. So, don't rely on the reviews, open the cover and read 'A Stranger in Paradise'! May you be entertained, uplifted and I hope inspired by the experience. Thank you for your time. Love Julie Chimes

1. A Stranger in Paradise

2. A Stranger in Paradise

3. A Stranger in Paradise

4. A Stranger in Paradise