Items related to Madness Visible : A Memoir of War

Madness Visible : A Memoir of War 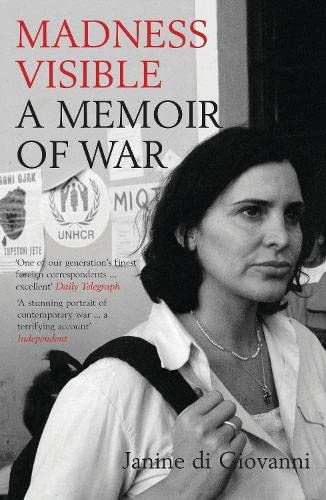 Award-winning journalist Janine di Giovanni spent much of the 1990s observing the cycles of violence and vengeance from inside Balkan cities and villages, refugee camps and makeshift hospitals. This was a conflict that raised challenging questions: what causes neighbours, whose families have lived peacefully for centuries, to turn with mindless brutality against one another? How do we measure the difference between bravery and cowardice in a conflict so morally ill-defined? What becomes of survivors when the fabric of an age-old community is destroyed? Searching for answers, di Giovanni brings the reality of war into focus: children dying from lack of medicine, women driven to despair and madness by their experiences in paramilitary rape camps and soldiers numbed by and inured to the atrocities they committed. In Madness Visible she paints an indelible portrait of the Balkans under siege and shows the true - human - cost of war.

Janine di Giovanni is senior foreign correspondent for The Times and contributing editor for Vanity Fair. She has won Granada Television's 'Foreign Correspondent of the Year' award, the National Magazine Award and two Amnesty International Media Awards. Author of Against the Stranger and The Quick and the Dead, she wrote the introduction to the bestselling Zlata's Diary. Janine di Giovanni lives in London and West Africa.

'A terrifying account, soberly written ... Presents a stunning portrait of the anarchy, cruelty and overwhelming confusion of contemporary wars' Independent 'Janine di Giovanni is superb - an extraordinarily brave war correspondent and a wonderful writer as well. What a combination!' William Shawcross 'A moving book by one of our generation's finest foreign correspondents ... some of the stories are so tragic that they are hard to get through ... excellent' Daily Telegraph 'Always compassionate, never sentimental, di Giovanni gives voice to the victims, perpetrators and architects of the conflict' Marie Claire

1. Madness Visible: A Memoir of War

2. Madness Visible : A Memoir of War