Items related to The True History of the Elephant Man

The True History of the Elephant Man 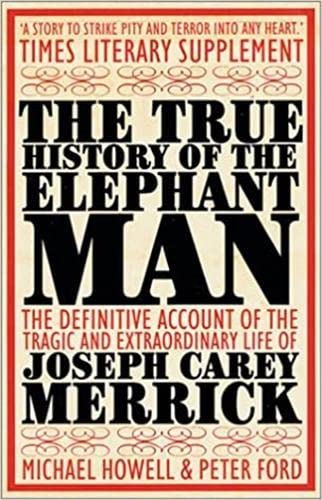 Joseph Carey Merrick, born in England on August 5, 1862, is better known as The Elephant Man. Through horrible physical deformities which were almost impossible to describe, he spent much of his life exhibited as a fairground freak until even nineteenth-century sensibilities could take no more. Hounded, persecuted and starving, he ended up at London’s Liverpool Street Station where he was rescued, housed and fed by the distinguished surgeon Frederick Treves. To Treves’ surprise, he discovered during the course of their friendship that lurking beneath the mass of Merrick's corrupting flesh lived a spirit that was as courageous as it had been tortured, and a nature as gentle and dignified as it had been deprived and tormented. The subject of several books, a Broadway hit, and a film, Joseph Merrick has become part of popular mythology. Here, in this fully revised edition containing new details, are the true and unromantic facts of his life. This is an extraordinary and moving story, set among the brutal realities of the Victorian world, telling of a tragic individual and his survival against overwhelming odds.

Michael Howell studied medicine at the University of Birmingham before going on to become a medical officer in the British Army. A specialist in children's diseases he eventually became a family doctor in general practice, a vocation he pursued until his death in 1986

In the mid 1880s, a patient admitted to the London Hospital in Whitechapel caught the imagination of the public. He was a horribly deformed man named Joseph Merrick, who suffered from severe multiple neurofibromatosis. The disease made portions of his body grow freakishly; hence, he was called the "elephant man" in sideshows, where he was exhibited before coming to the attention of doctors. Roughly a century later, Merrick again caught the public eye when his story was brought to film and Broadway. This revised edition of the 1980 original contains a more factual account of Merrick's life, including updated information about him and his condition. The text is capped with numerous photographs of the players, including some startling prints of Merrick while alive and of his deformed skeleton after death.
Copyright 2001 Reed Business Information, Inc.

1. The True History of the Elephant Man

2. The True History of the Elephant Man

3. The True History of the Elephant Man

4. The True History of the Elephant Man

5. The True History of the Elephant Man

6. True History Of The Elephant Man

7. THE TRUE HISTORY OF THE ELEPHANT