Items related to Caught Out In Cornwall (Cornish Mysteries)

Caught Out In Cornwall (Cornish Mysteries) 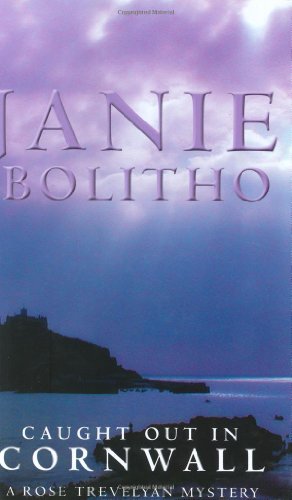 It’s a cold November afternoon on the beach at Marazion, overlooking St. Michael’s Mount, and the Cornish wind is whipping up the sea. When a distress flare goes up from a yacht in the bay, artist Rose Trevelyan immediately alerts the coastguard and soon a small crowd has gathered to watch the rescue in progress. With the rain coming down in sheets, Rose is concerned to see a little girl wandering alone on the shore but her fears are soon allayed as she is picked up and taken towards the safety of the car park. Her relief is short-lived, however - a young mother cannot find her daughter and she fits the description of the child Rose saw.

Little Beth Jones is only four years old and her mother is adamant that the man Rose saw taking the child away must be a stranger. Beth’s father hasn’t seen her since she was a small baby and there’s no one else her mother can think of who could be responsible. Rose is very troubled - when the man on the beach approached Beth, she held up her arms and asked to be carried. Far from being frightened, the little girl seemed to know and trust her abductor. As an artist she is trained to observe and she is sure of what she saw but now fears she made the wrong decision. Racked with guilt for not intervening, Rose cannot concentrate until she has tried to help in any way she can think of. But as the days pass by, the prospects of getting Beth back unharmed begin to look very bleak indeed.

Set against the backdrop of the stunning Cornish coastline, Deceived in Cornwall is another engrossing mystery featuring the much-loved amateur sleuth, Rose Trevelyan

JANIE BOLITHO enjoyed a variety of careers - psychiatric nurse, debt collector, working for a tour operator, a book-maker’s clerk - before becoming a full time writer. She died of breast cancer in late 2002.

As Rose Trevelyan wanders along the beautiful Cornwall seaside, she is relieved to see a seemingly lone child claimed by her father. However, things get confusing when Sally, a frantic mother, reports her daughter missing, and Rose's boyfriend, a police inspector, is called in. Narrator Patricia Gallimore renders the requisite degree of drama in the emotional story. Most fascinating are the two sisters, Carol and Sally, who compete over EVERYTHING. Bolitho's characters are well drawn, particularly Rose's newly widowed father. Despite the bizarre family dynamics, Gallimore remains believable. This is a different type of police procedural, one that contains police and witness errors, giving listeners a unique inside view. S.G.B. © AudioFile 2006, Portland, Maine-- Copyright © AudioFile, Portland, Maine

1. Caught Out In Cornwall (A&B Crime)