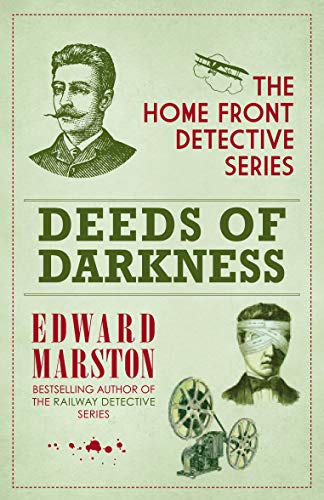 In June 1916, a young woman named Charlotte Reid is found murdered in a cinema. Harvery Marmion and Joe Keedy are assigned the task of finding the killer who so elusively fled in the dark. Before long, two more victims, of striking similarity but differing backgrounds, are found dead around the city. Meanwhile, miles from home, Marmion’s son Paul prepares for life on the front line as he marches towards the Battle of the Somme.

Edward Marston has written over a hundred books, including some non fiction. He is best known for his hugely successful Railway Detective series. His other current series are the Home Front Detective , set in the Great War, and the Bow Street Rivals, featuring identical twin detectives during the Regency.

"This is an excellently-plotted, enthralling read, with superbly-drawn characters, right down to the most minor of players. The deliciously disturbing image of a fetishist murderer who likes souvenirs of his victims is especially good. A particularly interesting feature of this novel is its capture of social history. More than a crime novel, it paints a vivid picture of the tensions that pervaded individuals’ lives at home during World War I, including the difficulties women faced at the time in their struggle for independence... Highly recommended." (Historical Novels Review)

"Deeds of Darkness is an excellent mystery and the author uses numerous viewpoints with great skill to enhance the story. Marston's research commands total belief as does his portrayal of the attitudes of the time... Deeds of Darkness is a beautifully crafted description of the time, with many interesting historical details. It is also a fascinating and, at times, chilling, police procedural with a likeable central cast of characters. I would recommend it." (Carol Westron Promoting Crime Fiction)