Items related to The Night Of Wenceslas & The Rose Of Tibet

Lionel Davidson The Night Of Wenceslas & The Rose Of Tibet

The Night Of Wenceslas & The Rose Of Tibet 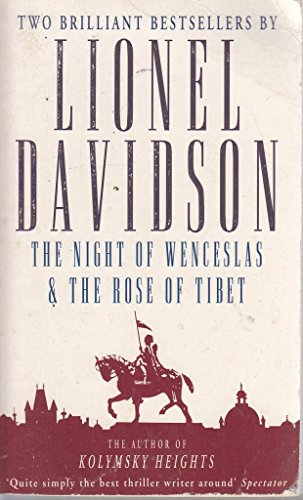 THE NIGHT OF WENCESLAS, Lionel Davidson's first novel, concerns Nicolas Whistler--24 years old, debt-ridden and thwarted in his attempts to rise in what was once the family business. Nicolas is conspired to take a trip from London to Prague, ostensibly to smuggle out some industrial secrets. But the secrets are, in fact, atomic, and Nicolas lets himself in for more than he bargained.

Davidson's award-winning novel is a crisp thriller which offers, as the careful plans unravel, glimpses of the Czech-emigre network in England, and of the inner workings of the British Embassy in Prague.

Lionel Davidson was born in 1922 in Hull, Yorkshire. He left school early and worked as a reporter before serving in the Royal Navy during the Second World War. His first novel, The Night of Wenceslas, was published in 1960 to great critical acclaim and drew comparisons to Graham Greene and John le Carre. It was followed by The Rose of Tibet (1962), A Long Way to Shiloh (1966), The Chelsea Murders (1978) and Kolymsky Heights (1994). He was thrice the recipient of the Crime Writers' Association Gold Dagger Award and, in 2001, was awarded the CWA's Cartier Diamond Dagger lifetime achievement award. He died in 2009.

1. The Night Of Wenceslas & The Rose Of Tibet