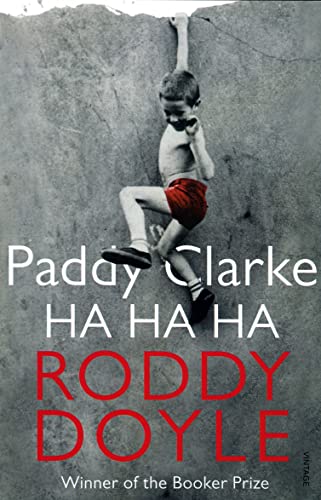 The 1993 Booker Prizewinner. Paddy Clarke, a ten-year-old Dubliner, describes his world, a place full of warmth, cruelty, love, sardines and slaps across the face. He's confused; he sees everything but he understands less and less.

In Roddy Doyle's Booker Prize-winning novel Paddy Clarke Ha Ha Ha, an Irish lad named Paddy rampages through the streets of Barrytown with a pack of like-minded hooligans, playing cowboys and Indians, etching their names in wet concrete, and setting fires. Roddy Doyle has captured the sensations and speech patterns of preadolescents with consummate skill, and managed to do so without resorting to sentimentality. Paddy Clarke and his friends are not bad boys; they're just a little bit restless. They're always taking sides, bullying each other, and secretly wishing they didn't have to. All they want is for something--anything--to happen.

Throughout the novel, Paddy teeters on the nervous verge of adolescence. In one scene, Paddy tries to make his little brother's hot water bottle explode, but gives up after stomping on it just one time: "I jumped on Sinbad's bottle. Nothing happened. I didn't do it again. Sometimes when nothing happened it was really getting ready to happen." Paddy Clarke senses that his world is about to change forever--and not necessarily for the better. When he realizes that his parents' marriage is falling apart, Paddy stays up all night listening, half-believing that his vigil will ward off further fighting. It doesn't work, but it is sweet and sad that he believes it might. Paddy's logic may be fuzzy, but his heart is in the right place. --Jill Marquis

Roddy Doyle is an internationally bestselling writer. His first three novels—The Commitments, The Snapper, and the 1991 Booker Prize finalist The Van—are known as The Barrytown Trilogy. He is also the author of the novels Paddy Clarke Ha Ha Ha (1993 Booker Prize winner), The Woman Who Walked into Doors, and A Star Called Henry, and a non-fiction book about his parents, Rory & Ita. Doyle has also written for the stage and the screen: the plays Brownbread, War, Guess Who's Coming for the Dinner, and The Woman Who Walked Into Doors; the film adaptations of The Commitments )as co-writer), The Snapper, and The Van; When Brendan Met Trudy (an original screenplay); the four-part television series Family for the BBC; and the television play Hell for Leather. Roddy Doyle has also written the children's books The Giggler Treatment, Rover Saves Christmas, and The Meanwhile Adventures and contributed to a variety of publications including The New Yorker magazine and several anthologies. He lives in Dublin.