Items related to How Late It Was, How Late

Kelman, James How Late It Was, How Late

How Late It Was, How Late 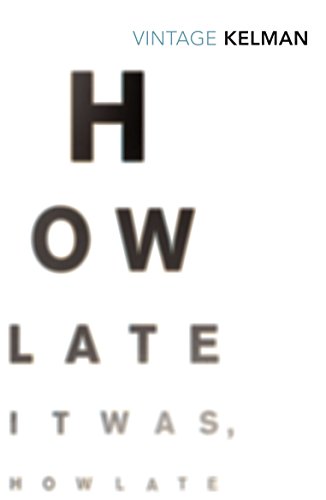 How Late it Was How Late

"Ye wake in a corner and stay there hoping yer body will disappear, the thoughts smothering ye; these thoughts; but ye want to remember and face up to things, just something keeps ye from doing it, why can ye no do it; the words filling yer head: then the other words; there's something wrong; there's something far far wrong; ye're no a good man, ye're just no a good man." From the moment Sammy wakes slumped in a park corner, stiff and sore after a two-day drunk and wearing another man's shoes, James Kelman's Booker Prize-winning novel How Late it Was, How Late loosens a torrent of furious stream-of-consciousness prose that never lets up. Beaten savagely by Glasgow police, the shoplifting ex-con Sammy is hauled off to jail, where he wakes to a world gone black. For the rest of the novel he stumbles around the rainy streets of Glasgow, brandishing a sawed-off mop handle and trying in vain to make sense of the nightmare his life has become. Sammy's girlfriend disappears; the police question him for a crime they won't name; the doctor refuses to admit that he's blind; and his attempts to get disability compensation tangle in Kafkaesque red tape. Gritty, profane, darkly comic, and steeped in both American country music and working class Scottish vernacular, Sammy's is a voice the reader won't soon forget. --Mary Park

Winner of the 1994 Booker Prize, this witty, controversial, and brilliant bestselling novel has been compared to the works of Joyce, Beckett, and many other masters.

A raw, wry vision of human survival in a bureaucratic world, How Late It Was, How Late opens one Sunday morning in Glasgow, Scotland, as Sammy, an ex-convict with a penchant for shoplifting, awakens in a lane and tries to remember the two-day drinking binge that landed him there. Then, things only get worse. Sammy gets in a fight with some soldiers, lands in jail, and discovers that he is completely blind. His girlfriend disappears, the police probe him endlessly, and his stab at Disability Compensation embroils him in the Kafkaesque red tape of the welfare system.

A masterpiece of black humor, subtle political parody, and Scottish lower-class vernacularHow Late It Was, How Late is a classic-to-be from one of today's most talented novelists.

"A work of marvelous vibrance and richness of character...It convinces, it charms, it entertains, it informs and it has life."--New York Times Book Review

"Witty, irreverent and thoroughly engrossing...Kelman is a major talent, and this is a bold, highly accomplished novel."--San Francisco Sunday Examiner and Chronicle

2. How Late It Was, How Late [Paperback] Kelman, James