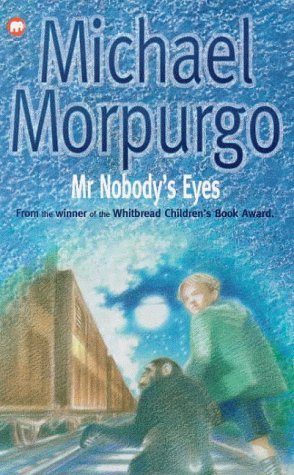 After the death of Harry's father, his mother remarries and Harry has a new step-brother. But Harry feels lonely and rejected, and he runs away with his friend Ocky, a chimpanzee from the circus. The author's other novels include "Friend or Foe" and "Why the Whales Came".

Michael Morpurgo Former Children's Laureate Michael Morpurgo needs no introduction. He is one of the most successful children's authors in the country, loved by children, teachers and parents alike. Michael has written more than forty books for children including the global hit War Horse, which was made into a Hollywood film by Steven Spielberg in 2011. Several of his other stories have been adapted for screen and stage, including My Friend Walter, Why the Whales Came and Kensuke's Kingdom. Michael has won the Whitbread Award, the Smarties Award, the Circle of Gold Award, the Children's Book Award and has been short-listed for the Carnegie Medal four times. He started the charity Farms for City Children in 1976 with his wife, Clare, aimed at relieving the "poverty of experience" many young children feel in inner city and urban areas. Michael is also a patron of over a dozen other charities. Living in Devon, listening to Mozart and working with children have provided Michael with the ideas and incentive to write his stories. He spends half his life mucking out sheds with the children, feeding sheep or milking cows; the other half he spends dreaming up and writing stories for children. "For me, the greater part of writing is daydreaming, dreaming the dream of my story until it hatches out - the writing down of it I always find hard. But I love finishing it, then holding the book in my hand and sharing my dream with my readers." Michael received an OBE in December 2006 for his services to literature.

Grade 4-8-- It's the '50s and Britain is recovering from the war. Harry's life is a mess. Miss Hardcastle has singled him out as a troublemaker in school, and at home his mother's husband and mother-in-law are preparing for the new baby. No one seems to notice him unless he is in trouble. One day Harry meets Signor Blondini and his chimpanzee companion, Ocky. When he runs into Ocky alone, he takes him back to his secret hideaway in a bombed-out, condemned house. In no time, Ocky and Harry are on the run as a number of events conspire to make Harry distrust everyone around him. In the end, after much excitement and travail, the stepfather proves to be kind and Harry heads happily home. This could have been a gripping novel with logical character development as Harry slowly learns about trust, love, and his own obligations to others. Unfortunately, the whining tone in the early chapters leaves readers with little sympathy for Harry. The ending is abrupt, as readers are not adequately prepared for Harry's sudden discovery that his stepfather and family do care about him. Adventure and suspense abound in this historical (well, to kids the '50s are history) novel, yet little of that time period or the realities of stepfamilies are conveyed. Best for readers who demand fast-paced action and are less concerned about appealing and convincing character growth. --Carol A. Edwards, Buckham Memorial Library, Faribault, MN
Copyright 1990 Reed Business Information, Inc.

Book Description Mammoth, 1990. Condition: Good. Reprint. Former Library book. Shows some signs of wear, and may have some markings on the inside. Seller Inventory # GRP83991678

Book Description Mammoth, 1990. Paperback. Condition: Good. All orders are dispatched the following working day from our UK warehouse. Established in 2004, we have over 500,000 books in stock. No quibble refund if not completely satisfied. Seller Inventory # mon0004188131

Book Description Mammoth 01/10/1990, 1990. Condition: Good. Will be shipped promptly from UK warehouse. Book is in good condition with no missing pages, no damage or soiling and tight spine. There may be some dog-eared pages showing previous use but overall a great book. Seller Inventory # 9053-9780749701048

Book Description Mammoth 01/10/1990, 1990. Condition: Very Good. This book is in very good condition and will be shipped within 24 hours of ordering. The cover may have some limited signs of wear but the pages are clean, intact and the spine remains undamaged. This book has clearly been well maintained and looked after thus far. Money back guarantee if you are not satisfied. See all our books here, order more than 1 book and get discounted shipping. . Seller Inventory # 7719-9780749701048

Book Description Mammoth 01/10/1990, 1990. Condition: Very Good. Shipped within 24 hours from our UK warehouse. Clean, undamaged book with no damage to pages and minimal wear to the cover. Spine still tight, in very good condition. Remember if you are not happy, you are covered by our 100% money back guarantee. Seller Inventory # 6545-9780749701048