Herge Tintin And The Blue Lotus (text In Cambodian/Khmer)

Tintin And The Blue Lotus (text In Cambodian/Khmer) 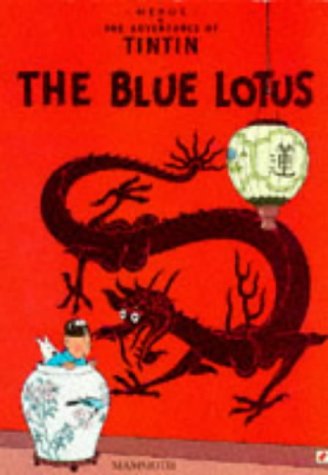 The classic graphic novel. A sequel to Cigars of the Pharaoh, Tintin follows a mysterious lead to China on the trail of a smuggling ring. Will Tintin find the criminal mastermind?

Picking up where he left off in the Egyptian adventure Cigars of the Pharaoh, Tintin travels to China in The Blue Lotus, a tale which is generally considered Herge's first masterpiece. It's also Tintin's only foray into actual history, specifically the Sino-Japanese conflicts of the early 1930s. The political tensions combined with the chilling threats of drugs give the story an especially high and realistic sense of danger. Herge's interest in China was spurred by a friendship with a young Chinese student named Chang Chong-chen, a relationship that Tintin mirrors with a Chinese boy also named Chang Chong-chen. Herge paints a vivid picture of China and takes the opportunity to denounce ethnic prejudices (though ironically his artistic depiction of the Japanese businessman Mitsuhirato is quite grotesque). Years later, Tintin's relationship with Chang would become the basis of Tintin in Tibet. --David Horiuchi

Hergé, one of the most famous Belgians in the world, was a comics writer and artist. The internationally successful Adventures of Tintin are his most well-known and beloved works. They have been translated into 38 different languages and have inspired such legends as Andy Warhol and Roy Lichtenstein. He wrote and illustrated for The Adventures of Tintin until his death in 1983.

Buy Used
A fair to good oversized softcover... Learn more about this copy

1. Tintin And The Blue Lotus (text In Cambodian/Khmer)

2. Tintin And The Blue Lotus (text In Cambodian/Khmer)

Book Description Casterman. Paperback. Condition: GOOD. Spine creases, wear to binding and pages from reading. May contain limited notes, underlining or highlighting that does affect the text. Possible ex library copy, will have the markings and stickers associated from the library. Accessories such as CD, codes, toys, may not be included. Seller Inventory # 3112656554

3. Tintin And The Blue Lotus (text In Cambodian/Khmer)

Book Description Casterman, 2001. Paperback. Condition: Good. Connecting readers with great books since 1972. Used books may not include companion materials, some shelf wear, may contain highlighting/notes, may not include cdrom or access codes. Customer service is our top priority!. Seller Inventory # S_284343819