Items related to The Sandman and the Turtles

Morpurgo, Michael The Sandman and the Turtles

The Sandman and the Turtles 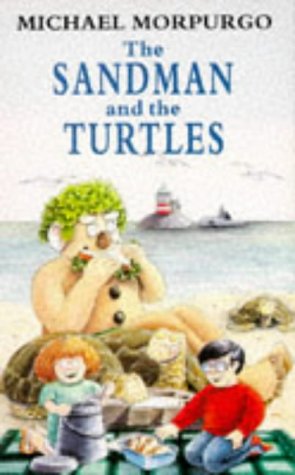 One summer holiday on the Welsh coast, Mike finds that one of his grandfather's stories becomes real, when the oddly-shaped rock formations on the beach come alive. The author's other books include "King of the Cloud Forests" and "Waiting for Anya", both shortlisted for the Carnegie Medal.

Former Children's Laureate Michael Morpurgo needs no introduction. He is one of the most successful children's authors in the country, loved by children, teachers and parents alike. Michael has written more than forty books for children including the global hit War Horse, which was made into a Hollywood film by Steven Spielberg in 2011. Several of his other stories have been adapted for screen and stage, including My Friend Walter, Why the Whales Came and Kensuke's Kingdom. Michael has won the Whitbread Award, the Smarties Award, the Circle of Gold Award, the Children's Book Award and has been short-listed for the Carnegie Medal four times. He started the charity Farms for City Children in 1976 with his wife, Clare, aimed at relieving the "poverty of experience" many young children feel in inner city and urban areas. Michael is also a patron of over a dozen other charities. Living in Devon, listening to Mozart and working with children have provided Michael with the ideas and incentive to write his stories. He spends half his life mucking out sheds with the children, feeding sheep or milking cows; the other half he spends dreaming up and writing stories for children. "For me, the greater part of writing is daydreaming, dreaming the dream of my story until it hatches out - the writing down of it I always find hard. But I love finishing it, then holding the book in my hand and sharing my dream with my readers." Michael received an OBE in December 2006 for his services to literature.

A pitch-perfect delivery brightens this familiar-seeming tale about stories that come true. Visiting his relatives at their farm in Wales every summer, Michael looks forward to Gramps's storytelling, "like a long, happy sigh at the end of each day." The stories are so much a part of the fabric of the summer that when Michael takes his seven-year-old cousin, Polly, to the beach and creates a Sandman like the one Gramps has described, it does not entirely surprise them that the Sandman wakes up and eats their picnic. Determined to help the Sandman return to his native Ireland, they enlist the help of another character from Gramps's repertoire. Predictably, the family reacts to Polly's progress reports with good-natured disbelief (Michael carefully evades the issue). Consequently there is some satisfaction when the various characters reveal themselves to Gramps and Aunt Eleri, especially when Aunt Eleri proves herself a worthy hostess by producing miraculous quantities of tea. Inextricably linking summer holidays with magic, Morpurgo (Waiting for Anya) casts a spell with his ambient dialogue-the Sandman's brogue and the British inflections rise from the page like music. Ages 8-12.
Copyright 1994 Reed Business Information, Inc.

1. The Sandman and the Turtles

Book Description Mammoth, 1992. Paperback. Condition: Good. All orders are dispatched the following working day from our UK warehouse. Established in 2004, we have over 500,000 books in stock. No quibble refund if not completely satisfied. Seller Inventory # mon0004507151

Shipping: US$ 7.35
From United Kingdom to U.S.A.
Destination, rates & speeds

2. The Sandman and the Turtles

Book Description -. Paperback. Condition: Very Good. The Sandman and the Turtles This book is in very good condition and will be shipped within 24 hours of ordering. The cover may have some limited signs of wear but the pages are clean, intact and the spine remains undamaged. This book has clearly been well maintained and looked after thus far. Money back guarantee if you are not satisfied. See all our books here, order more than 1 book and get discounted shipping. Seller Inventory # 7719-9780749710453

Shipping: US$ 8.58
From United Kingdom to U.S.A.
Destination, rates & speeds

3. The Sandman and the Turtles

Book Description Mammoth 05/11/1992, 1992. Condition: Very Good. Shipped within 24 hours from our UK warehouse. Clean, undamaged book with no damage to pages and minimal wear to the cover. Spine still tight, in very good condition. Remember if you are not happy, you are covered by our 100% money back guarantee. Seller Inventory # 6545-9780749710453

Shipping: US$ 8.58
From United Kingdom to U.S.A.
Destination, rates & speeds