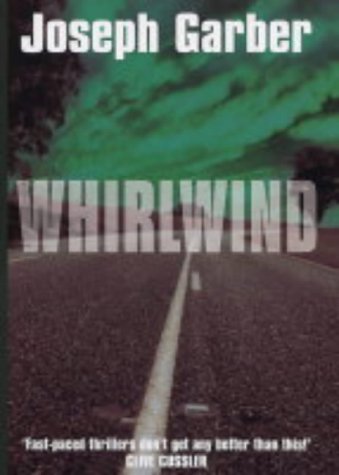 Joseph Garber is the author of the international bestseller Vertical Run and two other novels. Prior to becoming a novelist he was a journalist and businessman. He lives in Northern California, where is he is working on a new thriller.

A James Bond for the AARP set, unjustly disgraced ex-CIA agent Charlie McKenzie is called out of forced retirement when a secret weapon known as Whirlwind is stolen by gorgeous Russian spy Irina. Ever the knight-errant, he decides to protect Irina against the corrupt national security adviser and the evil South African mercenary who are also pursuing her. Much bickering ensues between the paternal Charlie and the feistily independent Irina, who has father issues, until, as they are picking off henchmen with a sniper rifle, a platonic May-December romance blossoms. Garber (Vertical Run) slathers on pure Hollywood cliché, as the story proceeds inexorably from trash-talking confrontation to climactic gasoline explosion, powered by a villain who is such a Teutonic effigy of exquisite politeness and barbaric cruelty that one wonders why he isn't wearing a monocle. But the trash-talk is snappy, the villain is deliciously hateful and the plot, fast-paced enough to leap over its own holes, leaves little time to reflect on the implausibility of Charlie's feats of ratiocination, or to note that his and Irina's problems are often caused by their own special-ops showboating. Charlie, a cocky, white-haired juggernaut adored by his family, effortlessly superior to his younger antagonists and still capable of arousing—and chivalrously deflecting—the passions of 20-something Russian babes, makes a gratifying fantasy hero.
Copyright © Reed Business Information, a division of Reed Elsevier Inc. All rights reserved.

Book Description Hardback. Condition: Very Good. The book has been read, but is in excellent condition. Pages are intact and not marred by notes or highlighting. The spine remains undamaged. Seller Inventory # GOR000899407

Book Description Piatkus, 2004. Hardcover. Condition: Good. Ex-Library Book. Has usual library markings and stamps inside. All orders are dispatched the following working day from our UK warehouse. Established in 2004, we have over 500,000 books in stock. No quibble refund if not completely satisfied. Seller Inventory # mon0003861568

Book Description Piatkus Books, 2004. Condition: Fair. This book has hardback covers. Ex-library, With usual stamps and markings, In fair condition, suitable as a study copy. Please note the Image in this listing is a stock photo and may not match the covers of the actual item,600grams, ISBN:9780749907068. Seller Inventory # 3909242

Book Description Piatkus 26/08/2004, 2004. Condition: Very Good. Shipped within 24 hours from our UK warehouse. Clean, undamaged book with no damage to pages and minimal wear to the cover. Spine still tight, in very good condition. Remember if you are not happy, you are covered by our 100% money back guarantee. Seller Inventory # 6545-9780749907068

Book Description -. Hardcover. Condition: Very Good. Whirlwind This book is in very good condition and will be shipped within 24 hours of ordering. The cover may have some limited signs of wear but the pages are clean, intact and the spine remains undamaged. This book has clearly been well maintained and looked after thus far. Money back guarantee if you are not satisfied. See all our books here, order more than 1 book and get discounted shipping. Seller Inventory # 7719-9780749907068