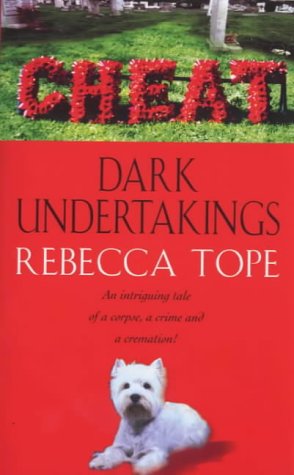 A life-long devotee of vitamins and herbal remedies, it seems ironic that 55-year-old Jim Lapsford should die from a heart attack. But trainee undertaker Drew Slocombe isn't so sure. As an ex-nurse, he's certain there's enough medical evidence for an inquest - but the cremation is only days away.

REBECCA TOPE grew up on a farm and has held a wide variety of jobs, such as pre-natal instructor, marriage counselor, and funeral director, all of which have taught her a great deal about human nature. In 1992, she founded Praxis Books, a small British press. She is the author of A Dirty Death.

Reading British author Tope's second novel (after her strong debut, 2000's A Dirty Death), set in the village of Bradbourne, is like sitting in a room full of people you hardly know listening to them talk endlessly about people you don't know at all. Jim Lapsford was the picture of health when he died of a massive coronary. Or was he poisoned, as trainee mortician Drew Slocombe suspects? The family doctor has diagnosed the coronary, and Slocombe is in no position to voice his opinion. In a week Lapsford will be cremated, the evidence destroyed. Obsessed with guilt over the loss of a sick child under his care while he was a nurse in a pediatric ward (a loss he was judged innocent of but for which he feels responsible just the same), he cannot "forget" his suspicion. But how to prove it without an autopsy? Lapsford was apparently a good husband and father, well liked by everyone. But in fact he was an incorrigible womanizer, hated by many including his younger son. Seeking clues, Slocombe learns why one of Lapford's mistresses describes Bradbourne as "the town without a soul." Slocombe is an inept detective for whom guesses and assumptions pass for facts. His obsessive psychology is as tedious as everyone else's. It all reminds one of a comment by a Seinfeld character who didn't like the movie The English Patient "Why doesn't he just finish his stupid story about the desert and die already!" Nonetheless, cozy fans who enjoyed A Dirty Death won't be disappointed.

Book Description Piatkus Books. Paperback. Condition: Fair. A readable copy. All pages are intact, and the cover is intact. Pages can include considerable notes-in pen or highlighter-but the notes cannot obscure the text. At ThriftBooks, our motto is: Read More, Spend Less. Seller Inventory # G0749931787I5N00

Book Description Paperback. Condition: Good. The book has been read but remains in clean condition. All pages are intact and the cover is intact. Some minor wear to the spine. Seller Inventory # GOR001658092

Book Description Paperback. Condition: Fair. A readable copy of the book which may include some defects such as highlighting and notes. Cover and pages may be creased and show discolouration. Seller Inventory # GOR001577258