Items related to An Offer from a Gentleman

Julia Quinn,Julia Quinn An Offer from a Gentleman 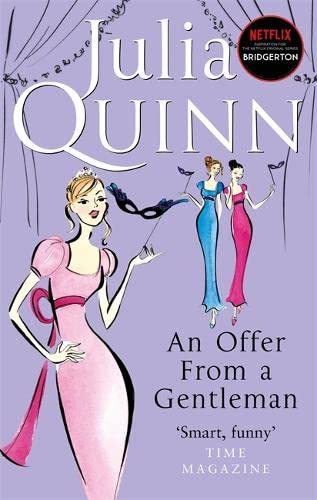 Sophie Beckett never dreamed she'd be able to sneak into Lady Bridgerton's famed masquerade ball -- or that "Prince Charming" would be waiting there for her! Though the daughter of an earl, Sophie has been relegated to the role of servant by her disdainful stepmother. But now, spinning in the strong arms of the debonair and devastatingly handsome Benedict Bridgerton, she feels like royalty. Alas, she knows all enchantments must end when the clock strikes midnight. Ever since that magical night, a radiant vision in silver has blinded Benedict to the attractions of any other - except, perhaps, this alluring and oddly familiar beauty dressed in housemaid's garb whom he feels compelled to rescue from a most disagreeable situation. He has sworn to find and wed his mystery miss, but this breathtaking maid makes him weak with wanting her. Yet, if he offers her his heart, will Benedict sacrifice his only chance for a fairy tale love?

Miss Sophie Beckett is the illegitimate daughter of the earl of Penwood. Raised in his home, Sophie has a tolerable existence until the earl marries, when her life takes a distinct turn for the worse. Sophie's new stepmother hates her, and when the earl passes away, she relegates Sophie to the role of servant. Sophie's days are pure drudgery, until one night her fellow servants conspire to help her attend a masquerade ball.

Her life changes irrevocably when she meets handsome Benedict Bridgerton and falls head over heels in love. Benedict is equally smitten, but when the clock strikes midnight his beautiful mystery lady runs from him, leaving only her glove in his hand. He searches London for her, but she seems to have vanished. What Benedict doesn't know is that Sophie's stepmother has discovered her outing and thrown Sophie out of their London townhouse. Sophie leaves London, and it isn't until three years later that Benedict and Sophie's paths cross once again, when he saves her from the unwanted attentions of a drunken lord. Sophie recognizes Benedict immediately, but much to her dismay, he doesn't know her in her maid's dress. Soon, however, Benedict falls in love with Sophie all over again. Believing her to be a servant, he cannot conceive of a way to make her his, as she adamantly refuses to become his mistress. Both struggle with their feelings for each other, their unwillingness to compromise their principles, and the seemingly insurmountable wall separating a member of the nobility and a servant. To add to their difficulties, Sophie's vindictive stepmother discovers her presence in London and sets out to make her life even more miserable. It will take the combined force of the large Bridgerton family to help these two stubborn people realize a happy future together.

Quinn brings a fresh approach to this charming retelling of the Cinderella story, enhancing the tale with a strong Regency setting and the warmth of Benedict Bridgerton's large family. Quinn has a reputation for witty dialogue and endearing characters, and she delivers both in this delightful novel. --Lois Faye Dyer