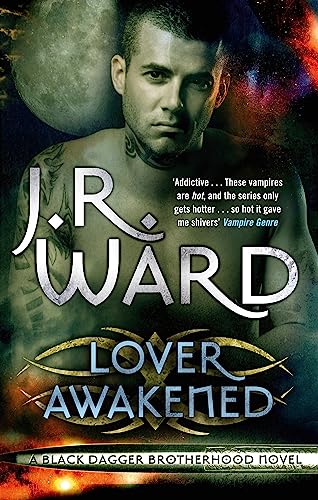 After graduating from law school J.R. Ward began working in health care in Boston and spent many years as chief of staff for one of the premier academic medical centres in the US. She lives in Kentucky with her husband.

“What if I told you I had a fantasy?”

Butch O’Neal put his Scotch down and eyed the blonde who’d spoken to him. Against the backdrop of Zero-Sum’s VIP area, she was something else, dressed in white patent leather strips, a cross between Barbie and Barbarella. It was hard to know if she was one of the club’s professionals or not. The Reverend only trafficked in the best, but maybe she was a model for FHM or Maxim.

She planted her hands on the marble tabletop and leaned in toward him. Her breasts were perfect, the very best money could buy. And her smile was radiant, a promise of acts done with knee pads. Paid or not, this was a woman who got plenty of vitamin D and liked it.

“Well, daddy?” she said over the trippy techno music. “Want to make my dream come true?”

He shot her a hard smile. Sure as hell, she was going to make someone very happy tonight. Probably a busload of someones. But he wasn’t going to be riding that double-decker.

“Sorry, you need to go taste the rainbow somewhere else.”

Her total lack of reaction sealed the deal on her professional status. With a vacant smile, she floated over to the next table and pulled the same lean and gleam.

Butch tilted his head back and swallowed the inch of La-gavulin left in his glass. His next move was to flag down a waitress. She didn’t come over, just nodded and beat feet for the bar to get him another.

It was almost three A.M., so the rest of the troika were going to show up in a half hour. Vishous and Rhage were out hunting lessers, those soulless bastards that killed their kind, but the two vampires were probably going to come in for a landing dis-appointed. The secret war between their species and the Less-ening Society had been quiet all January and February, with few slayers out and around. This was good news for the race’s civilian population. Cause for concern for the Black Dagger Brotherhood.

Butch smiled. That sound always made him think of night fog, the kind that hides what’s going to kill you. Good thing he liked the dark side.

“Evening, Reverend,” he said without turning around.

“I knew you were going to turn her down.”

“You a mind reader?”

Butch glanced over his shoulder. The Reverend was poised in the shadows, amethyst eyes glowing, mohawk trimmed tight to his skull. His black suit was sweet: Valentino. Butch had one just like it.

Although in the Reverend’s case the worsted wool had been bought with the guy’s own money. The Reverend, a.k.a. Reh-venge, a.k.a. brother of Z’s shellan, Bella, owned ZeroSum and took a cut of everything that went down. Hell, with all the de-pravity for sale in the club, he had a forest worth of green fun-neling into his piggy bank at the end of every night.

“Nah, she just wasn’t for you.” The Reverend slid into the booth, smoothing his perfectly knotted Versace necktie. “And I know why you said no.”

Not anymore he didn’t. “Maybe I just wasn’t into her.”

As Butch’s newest Scotch arrived, he gave it a quick vertical workout. “Do you now?”

“No offense, but I’d rather not about this.”

“Tell you what, cop.” The Reverend leaned in close and he smelled fantastic. Then again, Cool Water by Davidoff was an oldie but goodie. “I’ll help you anyway.”

Butch clapped a hand on the male’s heavy shoulder. “Only interested in bartenders, buddy. Good Samaritans give me the scratch.”

“Sometimes only the opposite will do.”

“Then we’re SOL.” Butch nodded out at the half-naked crowd writhing on hits of X and coke. “Everyone looks the same around here.”

Funny, during his years in the Caldwell Police Department, ZeroSum had been an enigma to him. Everyone knew the place was a drug hole and a sex pool. But no one at the CPD had been able to pin down enough probable cause to get a search warrant—even though you could walk in any night of the week and see dozens of legal infractions, most of them happening in tandem.

But now that Butch was hanging with the Brotherhood, he knew why. The Reverend had lots of little tricks in his bag when it came to changing people’s perceptions of events and circumstances. As a vampire, he could scrub clean the memo-ries of any human, manipulate security cameras, dematerialize at will. The guy and his biz were a moving target that never moved.

“Tell me something,” Butch said, “how have you managed to keep your aristocratic family from knowing about this little night job you got going on?”

The Reverend smiled so that only the tips of his fangs showed. “Tell me something, how did a human get so tight with the Brotherhood?”

Butch tipped his glass in deference. “Sometimes fate takes you in fucked-up directions.”

“So true, human. So very true.” As Butch’s cell phone went off, the Reverend got up. “I’ll send you over something.”

“You’re going to take that back.”

“Doubt it.” Butch took out his Motorola Razr and flipped it open. “What up, V? Where are you?”

Vishous was breathing like a racehorse with the dull roar of wind distortion backing him up: a symphony of ass hauling. “Shit, cop. We got problems.”

Butch’s adrenaline kicked in, lighting him up like a Christmas tree. “Where are you?”

“Out in the burbs with a situation. The damn slayers have started hunting civilians in their homes.”

“The hell you are. You stay put. I only called so you wouldn’t think we were dead when we didn’t show. Later.”

The connection cut off.

Butch sank back down in the booth. From the table next to him, a group of people let out a loud, happy burst, some shared joke teeing their laughter off like birds flushed into the open air.

Butch looked into his glass. Six months ago he’d had noth-ing in his life. No woman. No family he was close to. No home to speak of. And his job as a homicide detective had been eat-ing him alive. Then he’d gotten canned for police brutality. Fallen in with the Brotherhood through a bizarre series of events. Met the one and only woman who’d ever awed him stu-pid. Also had a total wardrobe makeover.

At least that last one was in the good category and had stayed there.

For a while the change had been a great mask of reality, but lately he’d noticed that for all the differences, he was right where he’d always been: no more alive than when he’d been rotting in his old life. Still on the outside looking in.

Book Description 2010. Paperback. Condition: New. Paperback. In the shadows of the night in Caldwell, New York, there's a deadly war raging between vampires and their slayers. And there exists a secret band of brothers like no other - six vampire wa.Shipping may be from multiple locations in the US or from the UK, depending on stock availability. 544 pages. 0.422. Seller Inventory # 9780749954437

Book Description 2010. Paperback. Condition: New. Paperback. In the shadows of the night in Caldwell, New York, there's a deadly war raging between vampires and their slayers. And there exists a secret band of brothers like no other - s.Shipping may be from our Sydney, NSW warehouse or from our UK or US warehouse, depending on stock availability. 544 pages. 0.422. Seller Inventory # 9780749954437