Items related to Conspiracy in Death 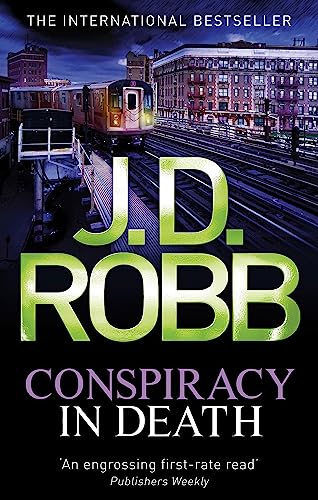 Eve Dallas must stray into the bowels of New York City when she is called to a street sleeper's homicide. All expectations go out the window when she discovers a laser-perfect hole where his heart used to be - the work of a highly skilled surgeon. Research reveals that similar deaths have been occurring across America and Europe, but all her efforts to work out why are confused by the fact that the organs are always faulty. As she digs further and the medical community shuts against her, Eve's problems become much worse as an internal investigation leaves her suspended from action and fighting to retain her fragile sense of identity. Eve and those loyal to her must go to even greater lengths as they get closer to the mastermind killer and the stakes are raised.

Streetwise cop Eve Dallas and her trusty sidekick Peabody face a methodical killer in this latest addition to the In Death series by J.D. Robb, better known as the bestselling author Nora Roberts.

In the late 21st century, on the streets of New York City, a street sleeper is found murdered, his diseased heart removed with surgical precision. His death would typically drop to the bottom of a list of senseless and inexplicable killings, but Lieutenant Dallas, who "would stand for the dead and the living," is not about to let that happen. When her research uncovers similar crimes in several cities that were dropped under mysterious circumstances, Dallas knows she's facing a killer cruel enough to prey on the weakest in society and powerful enough to conspire an extensive coverup.

To complicate matters further, Dallas faces an equally troubling threat to her career when she's linked to the death of a fellow cop. Now she must fight to restore her good name as well as track down the killer.

In Conspiracy in Death, Roberts creates a futuristic world of evil that Eve Dallas negotiates through tough talk and brute force. While Robb crafts the crimes with great care, she assumes a familiarity with the characters that new readers will lack. But fans of the In Death series and newcomers alike will enjoy the thrill of the chase as Eve Dallas sets out to get her man. --Nancy R.E. O'Brien

Under the pseudonym J.D. Robb, Nora Roberts published her first Robb novel in 1995. With the In Death series, Robb has become one of the biggest thriller writers on earth, with each new novel reaching number one on bestseller charts the world over.

Book Description 2011. Paperback. Condition: New. Paperback. Eve Dallas must stray into the bowels of New York City when she is called to a street sleeper's homicide. All expectations go out the window when she discovers a laser-perfect hole where h.Shipping may be from multiple locations in the US or from the UK, depending on stock availability. 496 pages. 0.384. Seller Inventory # 9780749956066

4. Conspiracy in Death (In Death Series)

Book Description PAPERBACK. Condition: New. Book Cover and ISBN may be different from US edition but contents as same US Edition. Excellent Quality,Quick delivery, We may ship the books from Asian regions for inventory purpose. Our courier service is not available at PO BOX. Seller Inventory # nt_9780749956066

Book Description 2011. Paperback. Condition: New. Paperback. Eve Dallas must stray into the bowels of New York City when she is called to a street sleeper's homicide. All expectations go out the window when she discovers a laser-perfect.Shipping may be from our Sydney, NSW warehouse or from our UK or US warehouse, depending on stock availability. 496 pages. 0.384. Seller Inventory # 9780749956066