Items related to I'll Do It! - Taking Responsibility

I'll Do It! - Taking Responsibility 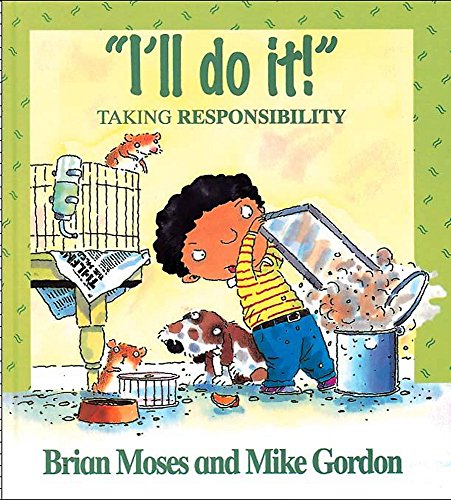 Encourages children to take responsibility for themselves and their actions. Situations include doing a few small jobs around the house and looking after a younger brother or sister. The book looks at the good effects that result from being sensible and responsible both at home and at school.

Brian Moses lives in the village of Etchingham with his wife Anne, a loopy labrador called Honey and a collection of bad-tempered chickens. He first worked as a teacher but has now been a professional children's poet since 1988. To date he has over 200 books published including volumes of his own poetry such as Holding the Hands of Angels (Salt) and Behind the Staffroom Door (Macmillan), anthologies such as The Secret Lives of Teachers and Aliens Stole My Underpants (both Macmillan), picture books such as Beetle in the Bathroom and Trouble at the Dinosaur Cafe (both Puffin) and non-fiction titles such as Titanic: Lost & Saved (Wayland). Over 1 million copies of Brian's poetry books have now been sold by Macmillan and in 2005 he was nominated for both the CLPE Award and the Spoken Word Award. Brian also visits schools to run writing workshops and perform his own poetry and percussion shows. To date he has visited well over 2500 schools and libraries throughout the UK. He has made several appearances at the Edinburgh Festival, been writer in residence at Castle Cornet on Guernsey, on the Romney, Hythe and Dymchurch Light Railway and at RAF schools in Cyprus. Recently he has visited several International schools in Germany, Switzerland, Belgium, Italy, Spain, France and Ireland. He has performed his poetry at Borders on Second Avenue, New York and in September 2006 he was invited to Iceland to take part in 'Kids in the Marsh' - a festival of children's poetry and song. At the request of Prince Charles he spoke at the Prince's Summer School for Teachers in 2007 at Cambridge University. He is one of ten children's poets invited by then Poet Laureate Andrew Motion to feature on the National Poetry Archive. Favourite book: 'Turtle Diary' by Russell Hoban. Favourite Movie: One Flew Over the Cuckoo's Nest Favourite Music: Bob Dylan

1. I'll Do It! - Taking Responsibility

3. I'll Do It! - Taking Responsibility