Items related to Galileo Galilei (Scientists Who Made History)

Galileo Galilei (Scientists Who Made History) 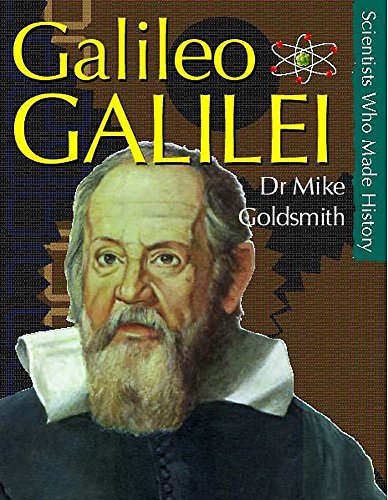 This title describes the life and career of the early seventeenth century Italian scientist Galileo Galilei, who caused a revolution in the study of physics and astronomy with his pioneering discoveries, changing forever our view of the Universe, and leading him into confrontation with the powerful Catholic Church.

Dr Mike Goldsmith is a physicist by training, currently a programme co-ordinator at the National Physical Laboratory. He has published numerous academic papers on subjects including astronomy and clocks. He is shortly to publish a novelty Workshop Clock for children.

Grade 4-6-As assignment fare goes, these biographies are certainly serviceable, combining generous arrays of both period and modern illustrations with well-organized accounts of their subjects' lives, intertwined with lucid explanations of their achievements and importance, all backed up by annotated lists of relevant books and Web sites. With refreshing, if simplistic, hyperbole (Aristotle "was wrong about almost everything in physics"), Goldsmith styles Galileo as the "first true scientist," a brilliant, charming, argumentative sort with a talent for making powerful friends and enemies, and whose imagination remained fertile throughout his long life. In contrast, Mason takes a calmer tone, portraying Edison as an outstanding businessman/ inventor whose creative period was largely over after the turn of the century. The famed "But it does move!" anecdote is strangely absent from Galileo, and of Edison's inventions only the phonograph and his improvements to the telephone are described in any detail. Yet, both authors do take peeks beyond their subjects' public lives, at Galileo's correspondence with his daughter Virginia, for instance, and at Edison's rocky relationship with Tom, Jr., and provide persuasive arguments for why these two men are worth studying. All in all, except to replace titles that have gone out of print, there is no clear reason to prefer these picture biographies over any of the several others currently available.
John Peters, New York Public Library
Copyright 2002 Reed Business Information, Inc.

1. Galileo Galilei (Scientists Who Made History)

Book Description Wayland, 2001. Paperback. Condition: Used; Acceptable. Ex-library. Dust jacket is damaged **Simply Brit** Shipped with Premium postal service within 24 hours from the UK with impressive delivery time. We have dispatched from our book depository; items of good condition to over ten million satisfied customers worldwide. We are committed to providing you with reliable and efficient service at all times. Seller Inventory # 2964701

Shipping: US$ 10.81
From United Kingdom to U.S.A.
Destination, rates & speeds