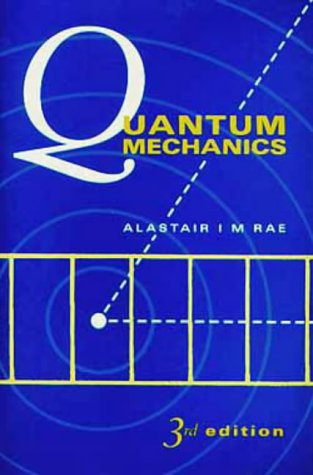 This text explains clearly and with the minimum of mathematics the quantum mechanics needed by physics undergraduates. It is aimed mainly at physics students who have finished the first year of their courses, but its easy-to-follow approach will appeal to any undergraduate following a quantum mechanics course.
It has been widely recommended as a course text for the last 12 years and this new edition brings the subjects covered right up-to-date - including an introduction to the de Broglie-Bohm hidden variable theory. Other changes include a discussion of the impressive new experiments that demonstrate neutron diffraction by macroscopic sized slits, a revised treatment of Clebsch-Gordan co-efficients and a fuller discussion of spontaneous emission in the chapter on time dependence.

Rae's book has struck almost exactly the right note in attractiveness of language without loss of rigor, and is informal in style and related in tone...
- The Times Higher Education Supplement

...fully hits its target as a highly stimulating introduction. This book certainly deserves its place in all university libraries and laboratories.
- Semiconductor Science and Technology

It has been widely recommended as a course text for the last 12 years and this new edition brings the subjects covered right up-to-date...It is recommended for second and third year undergraduates of physics, chemistry, and mathematics undergraduates.
- Zentralblatt

The addition of this new material has added a further dimension to what was already an excellent undergraduate text. The material is very well written, logically presented, and illustrated with relevant contemporary examples wherever appropriate...In summary, this is a first-rate and relatively inexpensive book that would be an extremely useful text for anyone studying or teaching quantum physics at the tertiary level. It would also be a valuable reference for postgraduate students needing a reasonably solid understanding of quantum mechanics for their research in other fields.
- P.V. Smith, The Physicist

I find this to be an excellent, clear, and scholarly text and would recommend it highly. I am particularly encouraged by the effort that Rae spends on attempting to explain the large fields of non-locality/Bohm theory...I am impressed by the clarity of the text.
- Professor Christopher Chantler

Alastair Rae's book Quantum Mechanics is established as a classic undergraduate text in this field and this is now its fourth edition. The structure of the book remains intact and the subject is logically and methodically developed. One of the major strengths of Rae's work is the lucidly written text and explanation of the steps...This remains an excellent course book in quantum mechanics and I would strongly recommend it as an undergraduate text for quantum physics.
- Dr. K. Dholakia, Contemporary Physics