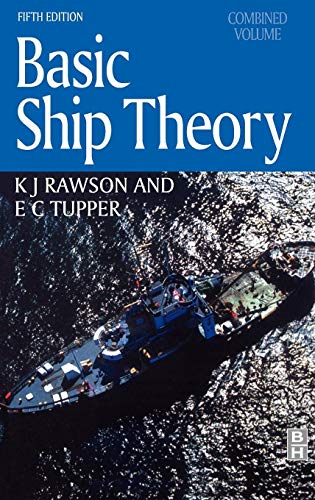 Rawson and Tupper's Basic Ship Theory, first published in 1968, is widely known as the standard introductory text for naval architecture students, as well as being a useful reference for the more experienced designer.

The fifth edition continues to provide a balance between theory and practice. Volume 1 discusses ship geometry and measurement in its more basic concepts, also covering safety issues, structural strength, flotation, trim and stability. Volume 2 expands on the material in Volume 1, covering the dynamics behaviour of marine vehicles, hydrodynamics, manoeuvrability and seakeeping. It concludes with some case studies of particular ship types and a discussion of maritime design. Both volumes feature the importance of considering the environment in design.

Basic Ship Theory is an essential tool for undergraduates and national vocational students of naval architecture, maritime studies, ocean and offshore engineering, and this combined hardback version will be of great assistance to practising marine engineers and naval architects.

Eric Tupper is a Fellow and Honorary Vice-President of the Royal Institution of Naval Architects (RINA), UK. In 2011 he received the William Froude Medal for outstanding contribution to naval architecture from RINA for his Basic Ship Theory books, co-authored with Ken Rawson. His long career in naval architecture has included ship design, hydrodynamic and structural research, and ship production.

"This is one of the leading textbooks for naval architect students, and it remains a fine reference book....The subject matter is presented clearly with a great deal of information contained in the two volumes... Basic Ship Theory remains a primary textbook, designed to provide the student with an understanding of the fundamental principles of shiop design. A particular strength is the large number (more than 500) of worked examples, with answers included in the text." --The Naval Architect, Feb 2002

"Will be of great assistance to practising marine engineers and naval architects." --Maritime Journal, December 2001

Reviews of previous editions: "This is a very good book and will be a welcome addition to the library of the naval architect." --Shipping World and Shipbuilder, December 1968

"This is a professional book - cheerful but no nonsense." --Scientific American, September 1969