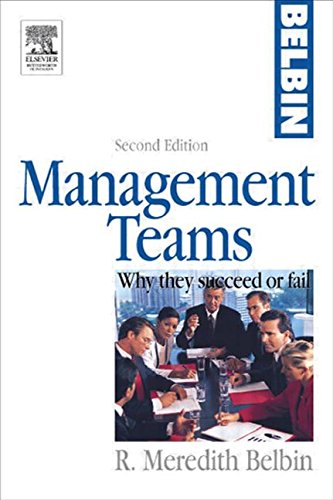 Meredith Belbin's work on teams has become part of everyday language in organizations all over the world.

All kinds of teams and team behaviours are covered. At the end of the book is a self-perception inventory so that readers can match their own personalities to particular team roles.

Management Teams is required reading for managers concerned with achieving results by getting the best from their key personnel.

*One of the most widely read, imaginative and influential books on this vital area of management research

World renowned authoritative and fascinating work on teams for professionals

First published in 1981, Management Teams: Why They Succeed or Fail covers an experimental approach to Management and was described by Professor Kempner, then Head of Henley Management College as "one of the most imaginative pieces of research". Its significance lay in the fact that "team-building will continue to be a major factor in the successful growth and development of enterprises". The Financial Times declared the book to claim a place "among the top 50 books in Management in the Twentieth Century".

The original book is now reprinted in a new edition. Meredith Belbin has written a new chapter on how during the intervening years the ideas on team-role theory have been put into practice and there is a guide on how the well known and now updated team-role inventory can be used. Ten case studies, covering varied applications, are also presented. Barrie Watson, author of one case study, writes " Fifteen years on I can say that I have had a great deal of success in applying the Belbin methodology in over 20 countries. In all of these cases the outcomes ... bear testimony to organisations consistently reporting tangible performance improvements, many of which have been publicly recognised".

R. Meredith Belbin, a previous chairman of the Industrial Training Research Unit and founder Member of Belbin Assiciates, holds a number of academic and industrial posts. He is also author of Team Roles at Work, The Job Promoters and The Coming Shape of Organization (1996).