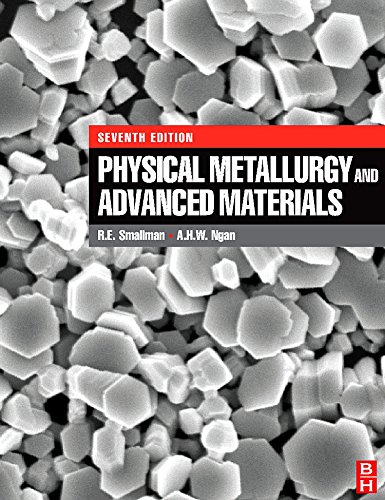 Physical Metallurgy and Advanced Materials is the latest edition of the classic book previously published as Modern Physical Metallurgy and Materials Engineering. Fully revised and expanded, this new edition is developed from its predecessor by including detailed coverage of the latest topics in metallurgy and material science. It emphasizes the science, production and applications of engineering materials and is suitable for all post-introductory materials science courses.

This book provides coverage of new materials characterization techniques, including scanning tunneling microscopy (STM), atomic force microscopy (AFM), and nanoindentation. It also boasts an updated coverage of sports materials, biomaterials and nanomaterials. Other topics range from atoms and atomic arrangements to phase equilibria and structure; crystal defects; characterization and analysis of materials; and physical and mechanical properties of materials. The chapters also examine the properties of materials such as advanced alloys, ceramics, glass, polymers, plastics, and composites. The text is easy to navigate with contents split into logical groupings: fundamentals, metals and alloys, nonmetals, processing and applications. It includes detailed worked examples with real-world applications, along with a rich pedagogy comprised of extensive homework exercises, lecture slides and full online solutions manual (coming). Each chapter ends with a set of questions to enable readers to apply the scientific concepts presented, as well as to emphasize important material properties.

Intended for senior undergraduates and graduate students it emphasises the science, production and applications of engineering materials. It is suitable for all post-introductory materials science courses.

After gaining his PhD in 1953, Professor Smallman spent five years at the Atomic Energy Research

Establishment at Harwell before returning to the University of Birmingham, where he became Professor

Metallurgy and Science of Materials in 1969. He subsequently became Head of the amalgamated

Department of Metallurgy and Materials (1981), Dean of the Faculty of Science and Engineering, and

the first Dean of the newly created Engineering Faculty in 1985. For five years he wasVice-Principal

He has held visiting professorship appointments at the University of Stanford, Berkeley, Pennsylvania

Metals for contributions to Physical Metallurgy (1972), the Platinum Medal, the premier medal of

(1990), a Foreign Associate of the United States National Academy of Engineering (2005), and

appointed a Commander of the British Empire (CBE) in 1992. A former Council Member of the

Science and Engineering Research Council, he has been Vice-President of the Institute of Materials

and President of the Federated European Materials Societies. Since retirement he has been academic

consultant for a number of institutions both in the UK and overseas.

of Birmingham, under the supervision of Professor Ray Smallman and Professor Ian Jones. He then

of Professor David Pettifor. In 1993, he returned to the University of Hong Kong as a Lecturer in

Materials Science and Solid Mechanics, at the Department of Mechanical Engineering. In 2003,

he became Senior Lecturer and in 2006 Professor. His research interests include dislocation theory,

electron microscopy of materials and, more recently, nanomechanics. He has published over 120

refereed papers, mostly in international journals. He received a number of awards, including the

of Hong Kong), Thomas Turner Research Prize (for the quality of his PhD thesis at the University of

Birmingham), Outstanding Young Researcher Award at the University of Hong Kong, and in 2007

was awarded the Rosenhain Medal of the Institute of Materials, Minerals and Mining. He also held

Institute in Beijing, and in 2003, he was also awarded the Universitas 21 Fellowship to visit the

University of Auckland. He is active in conference organization and journal editorial work.