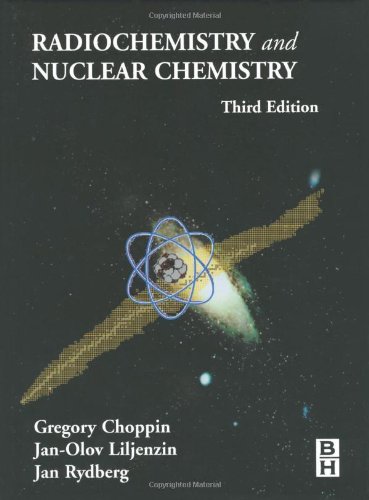 Radiochemistry or Nuclear Chemistry is the study of radiation from an atomic or molecular perspective, including elemental transformation and reaction effects, as well as physical, health and medical properties.

This revised edition of one of the earliest and best known books on the subject has been updated to bring into teaching the latest developments in research and the current hot topics in the field. In order to further enhance the functionality of this text, the authors have added numerous teaching aids that include an interactive website that features testing, examples in MathCAD with variable quantities and options, hotlinks to relevant text sections from the book, and online self-grading texts.
As in the previous edition, readers can closely follow the structure of the chapters from the broad introduction through the more in depth descriptions of radiochemistry then nuclear radiation chemistry and finally the guide to nuclear energy (including energy production, fuel cycle, and waste management).

As in the previous edition, readers can closely follow the structure of the chapters from the broad introduction through the more in depth descriptions of radiochemistry then nuclear radiation chemistry and finally the guide to nuclear energy (including energy production, fuel cycle, and waste management).

Jan-Olov Liljenzin was professor in Nuclear Chemistry at Chalmers University of Technology, Sweden, between 1989 and 2001, where he was also Dean of the School of Chemical Engineering from 1990 to 1995. Between 1986 and 1989 he was professor in Chemistry at the University of Oslo and Head of the National Committee on Nuclear Science in Norway. Prior to this, his extensive experience saw him hold positions at institutes around the world, including Euratom CCR, Ispra, Italy, and Lawrence Berkeley Laboratory, Berkeley, California, USA. He is an elected member of the Royal Swedish Academy of Engineering Sciences, the Royal Society of Arts and Languages, Göteborg and a permanent member of the Swedish Chemical Society.
His research has, among other things, involved the influence of chemistry on core melt accidents, leading on to international research about iodine chemistry, how to mitigate radioactive releases from nuclear accidents, various methods of treatment and separation of spent radioactive fuel, and chemical aspects of final repositories for radioactive waste. After his return to Sweden he was chairman of the research committee at the Swedish Nuclear Power Inspectorate until his retirement. He has 255 published papers and reports in his name or as a coauthor, and is coauthor of several textbooks and monographies.