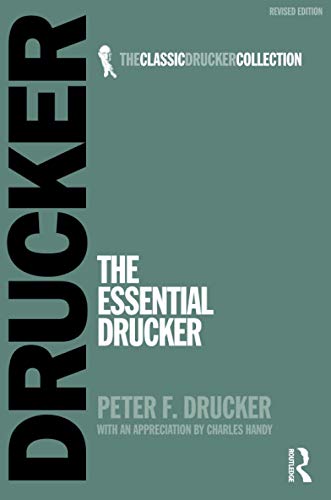 Peter Drucker's wide-ranging book, drawn from his best work, looks at management, the individual and society. He connects these themes of today's world with his usual clear-sighted and far-reaching style to create a work which encapsulates his essential and strongest writings in one volume.

Under the three headings, Drucker covers aspects such as what the non-profits are teaching business and the information that executives need today. In his section on the individual he gives advice on knowing your own strengths and values, your time and, intriguingly, the second half of your life. The third part on society encompasses the coming of the entrepreneurial society and citizenship through the social sector.

* A timeless classic from Peter F. Drucker, one of the world's leading management thinkers.
* wide-ranging book,looks at management, the individual and society
* A bestseller in the Drucker Classic Collection

Ever since his first book was published some six decades ago, Peter Drucker has been essential to everyone serious about the "management of an enterprise (and) the self-management of the individual, whether executive or professional, within an enterprise and altogether in our society of managed organizations." This distinguished 30-year Claremont University professor has continuously identified critical principles in management, economics, politics, and the world in general. And he has redirected our thinking about them through more than two dozen books, including an autobiography and a couple of works of fiction. Now, with The Essential Drucker, he has overseen the compilation of his most important fundamentals into one indispensable book.

Reaching back as far as 1954 with his treatise "Management by Objectives and Self-Control" ("Each manager, from the 'big boss' down to the production foreman or the chief clerk, needs clearly spelled-out objectives" that clarify expected contributions "to the attainment of company goals in all areas of the business"), Drucker's now-established ideas take on a surprising new relevancy when remixed equally pioneering ideas from the 1960s, '70s, '80s, and '90s. Between the thoughtful "Management as Social and Liberal Art" through the provocative "From Analysis to Perception--The New Worldview" (both originally published in 1988's The New Realities), this book revisits some of modern management's most inspired writing and presents it in a way that should appeal to both newcomers and those needing a refresher course on Drucker's basic beliefs. --Howard Rothman

Born in Vienna in 1909, Peter F. Drucker was educated in Austria and England. From 1929 he was a newspaper correspondent abroad and an economist for an international bank in London. Since 1937 he has been in the United States, first as an economist for a group of British banks and insurance companies, and later as a management consultant to several of the country's largest companies, as well as leading companies abroad. Drucker has since had a distinguished career as a teacher, first as Professor of Politics and Philosophy at Bennington College, then for more than twenty years as Professor of Management at the Graduate Business School of New York University. Since 1971 he has been Clarke Professor of Social Science at Claremont Graduate School in California. In addition to his management books, Peter Drucker is also renowned for his prophetic books analysing politics, economics and society. These books span fifty years of modern history beginning with The End of Economic Man (1939) and including The Practice of Management; Innovation and Entrepreneurship; Managing in the Next Society; Management Challenges in the 21st Century; The Effective Executive and The Essential Drucker.

6. The Essential Drucker (Paperback or Softback)