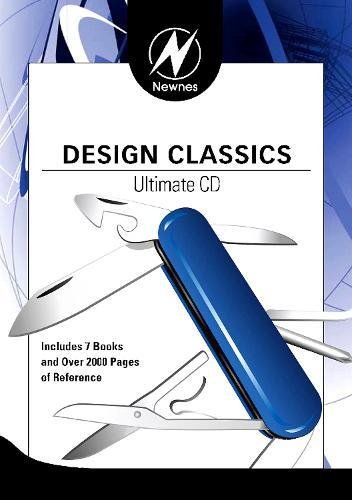 The Ultimate Value for Electronic Design Students and Professionals

Most engineers rely on a small core of books that are specifically targeted to their job responsibilities. These dog-eared volumes are used daily and considered essential. But budgets and space commonly limit just how many books can be added to your core library.

The Newnes Design Classics Ultimate CD solves this problem. It contains seven of our best-selling titles, providing the "next level" of reference you will need for a fraction of the price of the hard-copy books purchased separately. The CD contains the complete PDF versions of the following Newnes titles:

Tim Williams worked for a variety of companies as an electronic design engineer, before startinghis own consultancy specializing in EMC design and test advice and training. He has monitored the progress of the EMC Directive and its associated standards since it was first made public, over the last 25 years.

Marty Brown is the author of the Power Supply Cookbook and Practical Switching Power Supply Design. He earned his amateur radio license at the age of 11 and has had electronics as a hobby throughout his life. He graduated cum laude from Drexel University in 1974. His electronic design history includes underwater acoustics with the department of the Navy, airborne weather radar design (digital and SMPS), a satellite CODEC, and process control equipment. He was previously with Motorola Semiconductor as a principle application engineer, where he defined more than eight semiconductor products in the power conversion market and received two patents. He later started his own electronics consulting firm where he designed products from satellite power systems to power-related integrated circuits for many semiconductor companies. He is presently working in the field of digitally-controlled power supplies with Microchip Technologies. He has eight children, five of whom are adopted. His wife is an internationally known writer and speaker in the area of inter-racial adoption and related issues. He presently lives in Scottsdale, Arizona.

Clive "Max" Maxfield received a BS in Control Engineering from Sheffield Polytechnic, England in 1980. He began his career as a mainframe CPU designer for International Computers Limited (ICL) in Manchester, England. Max now finds himself a member of the technical staff (MTS) at Intergraph Electronics, Huntsville, Alabama. Max is the author of dozens of articles and papers appearing in magazines and at technical conferences around the world. Max's main area of interest are currently focused in the analog, digital, and mixed-signal simulation of integrated circuits and multichip modules.

Pease attended Mt. Hermon School, and graduated from MIT in 1961 with a BSEE. He worked at Philbrick Researches up to 1975 and designed many OpAmps and Analog Computing Modules.

Pease joined National Semiconductor in 1976. He has designed about 24 analog ICs including power regulators, voltage references, and temp sensors. He has written 65+ magazine articles and holds about 21 US patents. Pease is the self-declared Czar of Bandgaps since 1986. He enjoys hiking and trekking in Nepal, and ferroequinology. His position at NSC is Staff Scientist. He is a Senior Member of the IEEE.

Pease wrote the definitive book, TROUBLESHOOTING ANALOG CIRCUITS, now in its 18th printing. It has been translated into French, German, Dutch, Russian, and Polish. Pease is a columnist in Electronic Design magazine, with over 240 columns published. The column, PEASE PORRIDGE, covers a wide range of technical topics.

Pease also has posted many technical and semi-technical items on his main web-site: http://www.national.com/rap Many of Pease's recent columns are accessible there.

Pease was inducted into the E.E. Hall Of Fame in 2002. Refer to: http://www.elecdesign.com/Articles/Index.cfm?ArticleID=17269&Extension=pdf See Pease's other web site at http://www.transtronix.com

Martin C. Brown is one of the most active programmers outside of Be porting UNIX applications to the BeOS. He has worked with most varieties of UNIX, Mac, and Windows systems, doing everything from software development to system administration. When he’s not on the job as an IT manager, he is enthusiastically involved in the Be development effort.