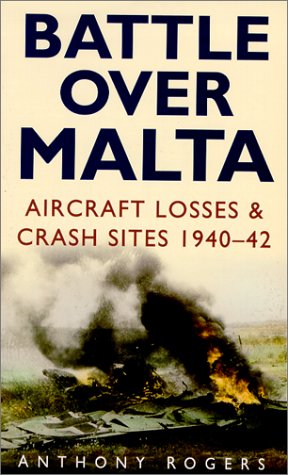 From 1940 to 1942, supremacy of the skies over Malta was bitterly contested by the RAF, the Regia Aeronautica and the Luftwaffe. Victory was eventually achieved, but at great cost, by the RAF together with Malta-based ground forces, the Royal Navy and the Mercantile Marine.

The desperate air battles have since passed into legend, epitomized by the early exploits of a few Royal Navy Sea Gladiator biplane fighters, taken over by the RAF and immortalized as Faith, Hope and Charity.

More than a thousand aircraft of all types were lost before the fighting was over. Many crashed into the Mediterranean, and others fell on Malta itself. Anthony Rogers has painstakingly researched the background to nearly 200 of these crashes, interviewing eyewitnesses and surviving aircrew, to provide a unique record of events.

The authors detailed and descriptive account includes a series of narrative snapshots that reveal just how bitter the air battle for Malta actually was. His work is supplemented with more than thirty wartime photographs, many of which are published here for the first time, and includes a use full section on aviation museums and collections on the island.

Anthony Rogers grew up in Malta and, in the mid 1970s, served there in the Royal Marines Commandos. He continued to use the island as a base while working in the oil industry until recession, and an interest in the media, led to a new career as a photojournalist. He maintains links with Malta through visits and his membership of various associations.