Items related to The Drums of Noto Hanto

The Drums of Noto Hanto 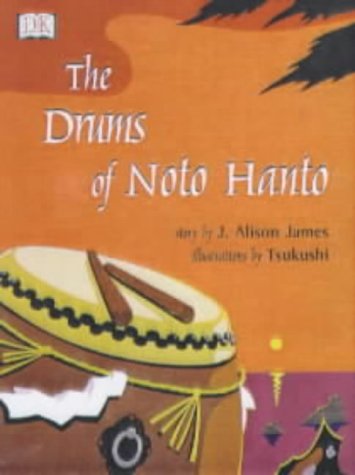 This book is based on a visit to Noto Hanto to meet the descendants of the original villagers who performed "go jinyo daiko", which is a festival using drums and masks. The book invites children to play and participate in the storytelling through drum and rhythm participation.

J. Alison James is the author of two novels, Sing for a Gentle Rain, an ALA Best Book for Young Adults and an ABA Pick of the Lists, and Runa, as well as the translator of more than seventy books for younger readers. She visited Noto Hanto and met descendants of the original villagers after hearing a taiko drumming group perform "go jinjyo daiko," which tells this story using drums and masks, in Burlington, Vermont, near her home. Tsukushi is well known as an artist in her native Japan, where she has created three wordless books for adults: Roadmovie, Sentimental Journey, and Salaryman. The Drums of Noto Hanto marks the first appearance of her work in America, and is her first for children. She now lives in Riverdale, New York.

Strikingly handsome cut-paper illustrations, reminiscent of David Wisniewski's work, light up the pages of this dramatic picture book, based on a historical incident in ancient Japan. From the opening image of a drum that protrudes onto the spread as theatrically as the nearby isles erupting from the Sea of Japan, this tale will grab readers' attention. The villagers of Noto Hanto mark each change of season with the playing of the drums. But when a covetous warlord threatens to invade the town, the drums take on a new role. As samurai warriors approach, the villagers join forces to scare off their attackers with bonfires, monster masks fashioned from bark and seaweed, and drums that "boomed like thunderADON kada DON kada DON DON DON!" James (Sing for a Gentle Rain) parades a series of verbal images as colorful as they are powerful (e.g., the village "points upward like a thumb into the Sea of Japan"), and her skillful use of onomatopoeia conveys the differing timbres and types of drums. The text exudes a palpable energy that will spark inspired read-aloud sessions. Tsukushi's artwork matches the intensity of the prose with fluidity of line and complexity of composition. A samurai battleship sails against a blood-red sky, masked villagers dance wildly by firelight and drummers sit in a circle concentric with the edge of the globe and the drum as they beat for their livesAthe vividness of the spreads is nothing short of hypnotic. Wit triumphs over will in this splendid picture book. Ages 4-8. (Sept.)
Copyright 1999 Reed Business Information, Inc.

1. The Drums of Noto Hanto

Shipping: US$ 13.20
From United Kingdom to U.S.A.
Destination, rates & speeds