Items related to Handbook of Surfactants 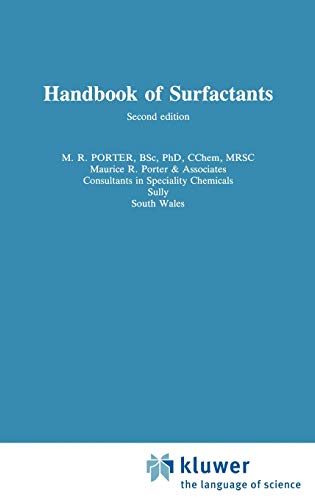 In preparing the second edition of this book, I have revised, updated and extended the original material, with particular attention to two areas of the book where there has been considerable publication of new material. The chapters on the use of surfactant theory and polymeric surfactants have been completely rewritten. Surfactant theory has seen considerable progress in the 1980s, but it is only in the last few years that it has been simplified such that it can be used in helping to formulate compositions containing surfactants in different applications. It must be admitted that even now most applications utilise empirical methods of formulation but the results in many cases can be better interpreted. Wetting and micro­ emulsions are now much better understood, but foams and defoamers still elude simplification. The use of theory in formulating compositions will probably very slowly be extended, but only if fairly simple rules, preferably non-mathematical, can be taught to industrial chemists. The concept of geometrical packing of surfactant molecules at an interface and the effect of the relative size of the head and tail has probably been the major advance in simplifying theory. This concept is now well recognised in the scientific literature but is not yet used widely by technologists using surfactants. I hope that this book will help in spreading the use of this simple concept.

Of previous edition:; Serves the intended purpose well. - Polymer News; A work of reference covering the wide range of all the main types of agents of this nature available currently ... crammed with useful facts about a wide variety of surfactants. - Analyst; It will be a very worthwhile purchase for all those involved with surfactants. - Talanta; Provides a step-by-step account of the problems faced by formulators and gives guidance relating to sources of information. - British Book News; This book is an easily read and well set out account of what is commercially available. It should be useful to chemists formulating products which include surfactants throughout the chemical industry. - Chemistry in Britain