Items related to Gangland Volume 2: The Underworld in Britain and Ireland

Morton, James Gangland Volume 2: The Underworld in Britain and Ireland

Gangland Volume 2: The Underworld in Britain and Ireland 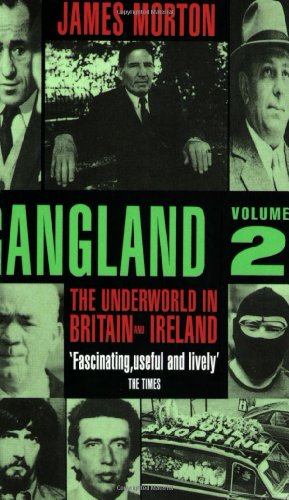 In Gangland, his survey of London's underworld, James Morton concentrated on the history, personalities, and powers behind the capital's criminal fraternity. In this companion volume, he turns his attention to the country as a whole, assessing the role of the criminal families, gangs, and organizations in Britain's major cities. After a concise overview of the London scene, including families such as the Krays, the Sabinis, and the Richardsons, Morton embarks on a nationwide tour of robbery, extortion, and vice. From Glasgow's hard men to the burgeoning drugs market on Manchester's Moss Side, the book discusses the people and places behind the profession of violence, documenting the histories, fads, and feuds, and offering views on the crimes themselves.

James Morton is the author of the hugely successful Gangland series. He has long experience as a solicitor specialising in criminal work and was editor-in-chief of NEW LAW JOURNAL for many years.

Fascinating * LAW Society GAZETTE * Erudite, meticulously researched and highly readable...a genuine 'must read * - WHAT'S ON IN LONDON * Gripping...strong on incident...The book is at its best when it chronicles the changing role of women in crime, the powerful connections between the underworld and sport and the growth and increasing importance of the drugs trade * Time Out * Ranges far and wide to uncover characters within the underworld...The tales are told with a flourish in a fascinating, useful and lively history * The TIMES *

1. Gangland Volume 2: The Underworld in Britain and Ireland