Items related to The Last Governor 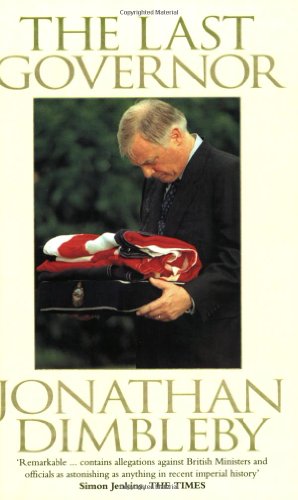 In July 1997, Hong Kong will ceased to be a British colony and will reverted to the People's Republic of China. Five million people lost their status as British subjects and became citizens of a Special Administrative Region of the PRC. It was always clear that the last five years of British rule would be fraught with uncertainty. For this reason, the appointment of the former Chairman of the Conservative Party, Chris Patten, in June 1992 as the last governor of Hong Kong, was greeted with widespread approval. With rare and priveleged access to the governor and his team, the author provides an insight into events leading up to the handover, including reasons why relations between China and Britain were at their lowest ebb for a generation. The situation is placed in its human and historical context.

This book interweaves the stories of a unique city and a controversial politician. Appointed governor of Hong Kong in 1992, Chris Patten was to prepare the prosperous colony for Communist Chinese rule, a reversal of the independence normally associated with the end of colonialism, in 1997. Though his hands were tied by politics and history, Patten did his courageous best to develop democratic structures that would survive China's takeover. Besides bitter Chinese opposition, he faced resistance at home from compliant British diplomats to firebrand Hong Kong politicians, even some members of the local business community who feared profits would be lost in any confrontation with China.

Dimbleby's access as a close friend of Patten gives credibility to his behind-the-scenes account. Of particular value are his descriptions of the machinations of the foreign office in London and civil service in Hong Kong, and his analysis of the tortuous creation of political systems that led to Hong Kong's first, and possibly last, direct election in 1995. In the process, he lays to rest the notion that Hong Kong people do not care about democratic freedoms and are interested only in getting rich. He tells a lively tale of a fearless man who began his impossible task reviled by the local press but who left the colony, tears in his eyes, having gained the trust of his charges. --John Stevenson

Using unrivalled access to Chris Patten, Britain's last governor of Hong Kong, Jonathan Dimbleby provides a compelling narrative of a great political and human drama: the final chapter in Britain's colonial history, the five years leading up to the handover of Hong Kong and its five million people to Communist China on July 1, 1997.

Since 1992 Dimbleby had privileged access to Patten, and to key diplomats, politicians, and business leaders in Hong Kong, as he developed both this book and a five-part BBC TV series, which was shown on TVOntario.

He sets the crisis - with its many consequences for Canada and the rest of the world - against 150 years of Anglo-Chinese relationships since the Opium Wars and the seizure of Hong Kong. He also provides a panoramic portrait of colonial rule and of the shining capitalist "jewel" itself, using the voices of its people - from the richest entrepreneur to the poorest refugee.