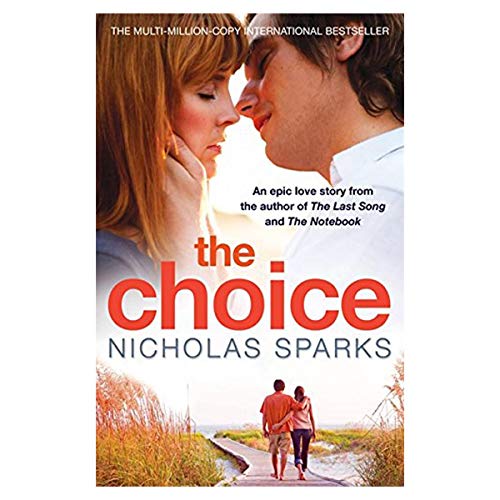 Set amid the austere beauty of the North Carolina coast, Nicholas Sparks tells the story of Travis Parker, a small-town veterinarian who's perfectly content with the active and exciting life he leads. Since he uses his spare time bungee jumping and swimming with the dolphins, he can't shake the belief that a woman would simply slow him down. That is, until Gabby Holland enters his life.
Gabby, Travis's new neighbor, is in love with her boyfriend of three years, and wants nothing more than to start planning the wedding she's always dreamed about. However, there is a story within a story and the connection between Travis and Gabby is just a beginning. As their tale unfolds, their relationship becomes something different--with much higher stakes. With echoes of THE NOTE BOOK abound, listeners everywhere will fall in love.

With over 100 million copies of his books sold, Nicholas Sparks is one of the world's most beloved storytellers. His novels include fourteen #1 New York Times bestsellers, and all of his books, including Three Weeks with My Brother, the memoir he wrote with his brother, Micah, have been New York Times and international bestsellers, and were translated into more than fifty languages. Eleven of Nicholas Sparks's novels--The Choice, The Longest Ride, The Best of Me, Safe Haven, The Lucky One, The Last Song, Dear John, Nights in Rodanthe, The Notebook, A Walk to Remember, and Message in a Bottle--have been adapted into major motion pictures.

Holter Graham gives a polished performance with his versatile skills and vocal range as he embraces the roles of Travis Parker, local veterinarian, and Gabby Holland, physicianÕs assistant. In Part One, Graham captures the exquisite story of their attraction, love, and marriage with a warmth and rhythm that breathes life into the characters. Ten years later in Part Two, Graham portrays TravisÕs torment when Gabby falls into a coma after a car accident that is his fault. As Gabby fails to recover, Graham captures TravisÕs conflict over a decision he must make--a decision based on a promise Gabby extracted from him before her life took its tragic turn. A compelling story. G.D.W. © AudioFile 2008, Portland, Maine-- Copyright © AudioFile, Portland, Maine

2. CHOICE : HOW FAR WOULD YOU GO TO KEEP

3. CHOICE : HOW FAR WOULD YOU GO TO KEEP