Items related to Bones Beneath 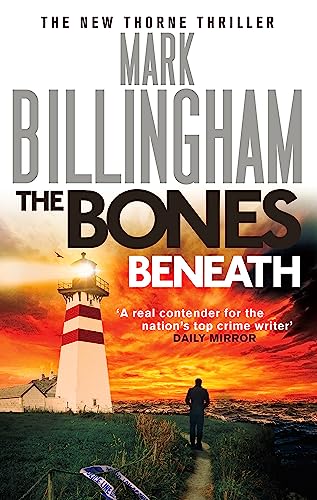 Mark Billingham has twice won the Theakston's Old Peculier Award for Crime Novel of the Year, and has also won a Sherlock Award for the Best Detective created by a British writer. Each of the novels featuring Detective Inspector Tom Thorne has been a Sunday Times bestseller. Sleepyhead and Scaredy Cat were made into a hit TV series on Sky 1 starring David Morrissey as Thorne, and a series based on the novels In the Dark and Time of Death was broadcast on BBC1. Mark lives in north London with his wife and two children.

Detective Inspector Tom Thorne is, as usual, put out. Infamous serial killer Stuart Nicklin is once again playing mind games, claiming he will lead police to the corpse of a 15-year-old boy he murdered when they were both in an experimental program for adolescent offenders on remote Bardsey Island, located off the Welsh coast. What’s more, Nicklin will only do so if Thorne accompanies him; Nicklin also requests that fellow prisoner Jeffrey Batchelor, a former college professor incapacitated by depression over his crime and the brutality of prison life, be present to ward off any police brutality, since Nicklin murdered a police officer when he was arrested. Thorne is right to be suspicious. Inhospitable conditions and inclement weather, along with Nicklin’s offensive running commentary, all conspire to make the trip a nightmare. And that’s well before Nicklin’s scheme to exact revenge on Thorne is set into motion. In the twelfth series entry, Billingham makes the most of his bleak, rugged setting while creating an atmosphere of chilling menace as flashbacks reveal the full extent of Nicklin’s sadism and Thorne’s vulnerability. --Joanne Wilkinson

2. The Bones Beneath (Tom Thorne Novels)