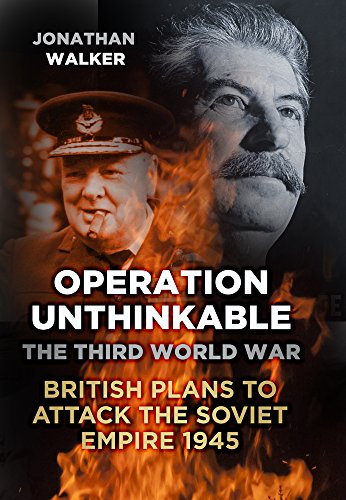 As the war in Europe entered its final months, the world teetered on the edge of a Third World War. While Soviet forces smashed their way into Berlin, Churchill ordered British military planners to prepare the top secret Operation Unthinkable—the plan for an Allied invasion of the Soviet Union on July 1, 1945. Using U.S., British, and Polish forces, the invasion would reclaim Eastern Europe for the West. The plan called for the use of the atomic bomb and Nazi troops if necessary—highly controversial, as the true extent of the Holocaust was becoming clear. This haunting study of the war that so nearly was outlines the motivations behind Churchill's plan, the logistics of launching a vast assault against an enemy who had bested Hitler, potential sabotage by Polish communists, and whether the Allies would have succeeded. Well supported by a wide range of primary sources from the Polish Underground Museum Study Trust, Sikorski Institute, National Archives, and Imperial War Museum, this is a fascinating insight into the upheaval as World War II drew to a close and the Allies' mistrust of the Soviet Union that would blossom into the Cold War.

Jonathan Walker is a member of the British Commission for Military History and the author of Aden Insurgency: The Savage War in Yemen, The Blood Tub: General Gough and the Battle of Bullecourt, and Poland Alone: Britain, SOE and the Collapse of the Polish Resistance, 1944.

Book Description Spellmount. Hardcover. Condition: As New. Dust Jacket Condition: As New. 0752487183 2013, hardback in jacket, 192 pages | this copy appears unread and barely distinguishable from new; it has been signed by the author | professional booksellers based in the UK | we package with great care and usually dispatch within 24hrs, always within two working days | please request scans or further information on any of our listings, which are all in stock and ready to be dispatched. Signed by Author(s). Seller Inventory # SKU1009536

Book Description Spellmount, 2013. Condition: Good. A+ Customer service! Satisfaction Guaranteed! Book is in Used-Good condition. Pages and cover are clean and intact. Used items may not include supplementary materials such as CDs or access codes. May show signs of minor shelf wear and contain limited notes and highlighting. Seller Inventory # 0752487183-2-4

Book Description Paperback. Condition: Very Good. The book has been read, but is in excellent condition. Pages are intact and not marred by notes or highlighting. The spine remains undamaged. Seller Inventory # GOR005532126