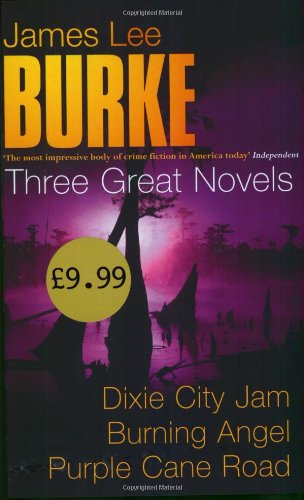 DIXIE CITY JAM When a Nazi submarine is discovered lying in sixty feet of water off the Louisiana coast, some troubled ghosts are ready to be released. A local businessman is offering Detective Dave Robicheaux big money to bring the wreck to the surface, but he is not the only one after the submarine and its cargo. A new spirit of hatred is abroad, and its embodiment is stalking Robicheaux's wife...BURNING ANGEL When Sonny Marsallas entrusts a mysterious notebook to Dave Robicheaux, a series of violent events is set in train. What did Sonny's girlfriend know that resulted in her murder? What are Sonny's connections with the Mob that finally lead them to send a hitman after Dave? BURNING ANGEL outstrips its crime thriller label to produce a rich, sardonic and terrifying portrayal of contemporary America. PURPLE CANE ROAD Detective Dave Robicheaux embarks on a painful journey to a murky past, when he his told that his mother, Mae, was a hooker and ended her life drowned in a puddle by two cops working for the Mob. Dave learns to confront and accept his mistakes as he tries to track down his mother's killers and bring them to justice.

James Lee Burke is the author of nineteen previous novels, including eleven featuring Detective Dave Robicheaux. He lives with his wife, Pearl, in Missoula, Montana and New Iberia, Louisiana.