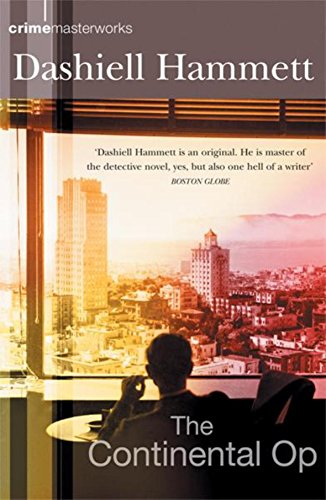 Dashiell Hammett is the true inventor of modern detective fiction and the creator of the private eye, the isolated hero in a world where treachery is the norm. The Continental Op was his great first contribution to the genre and these seven stories, which first appeared in the magazine Black Mask, are the best examples of Hammett's early writing, in which his formidable literary and moral imagination is already operating at full strength. The Continental Op is the dispassionate fat man working for the Continental Detective Agency, modelled on the Pinkerton Agency, whose only interest is in doing his job in a world of violence, passion, desperate action and great excitement.

Short, thick-bodied, mulishly stubborn, and indifferent to pain, Dashiell Hammett's Continetal Op was the prototype for generations of tough-guy detectives. In these stories the Op unravels a murder with too many clues, looks for a girl with eyes the color of shadows on polished silver, and tangles with a crooked-eared gunman called the Whosis Kid.

Dashiell Hammett (1894-1961) was born in Maryland and worked in a number of menial jobs until he became an operative for the Pinkerton Detective Agency. His experiences as a private detective laid the foundations for his writing career. His work includes Red Harvest, The Maltese Falcon, The Glass Key, The Thin Man and some eighty short stories, mostly published in Black Mask magazine.

Book Description Paperback. Condition: Very Good. The book has been read, but is in excellent condition. Pages are intact and not marred by notes or highlighting. The spine remains undamaged. Seller Inventory # GOR001783218

Book Description Orion, 2004. Paperback. Condition: Used; Good. **Simply Brit** Shipped with Premium postal service within 24 hours from the UK with impressive delivery time. We have dispatched from our book depository; items of good condition to over ten million satisfied customers worldwide. We are committed to providing you with reliable and efficient service at all times. Seller Inventory # 1164856

Book Description Orion, 2004. Paperback. Condition: Very Good. WE ARE PROCESSING ORDERS AS NORMAL DURING THIS VIRUS EPEDEMIC, ALL ITEMS ARE SENT BY ROYAL MAIL. DISPATCHED FROM THE UK WITHIN 24 HOURS ( BOOKS ORDERED OVER THE WEEKEND DISPATCHED ON MONDAY) BY ROYAL MAIL. ALL OVERSEAS ORDERS SENT BY AIR MAIL. WE ALSO ACCEPT PAYMENT IN US DOLLARS OR EURO BY BANK TRANSFER. Seller Inventory # mon0000633268

Shipping: US$ 11.82
From United Kingdom to U.S.A.
Destination, rates & speeds