Items related to In Praise of Slow : How a Worldwide Movement Is Challenging...

Honore, Carl In Praise of Slow : How a Worldwide Movement Is Challenging the Cult of Speed 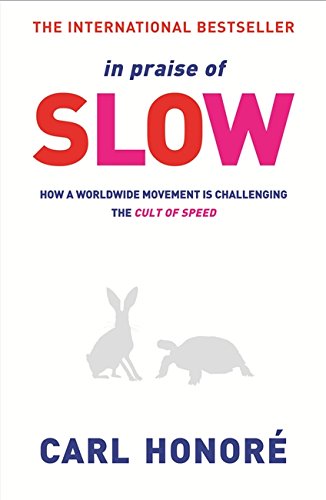 These days our culture teaches that faster is better. But in the race to keep up, everything suffers - our work, diet and health, our relationships and sex lives. We are in such a hurry that anyone or anything that slows us down becomes the enemy. Carl Honore uncovers a movement that challenges the cult of speed by proving that slower is often better. The Slow movement is not about doing everything at a snail's pace; it is about living better in the hectic modern world by striking a balance between fast and slow. From a Tantric sex workshop in London and a SuperSlow exercise studio in New York to Italy, home of the Slow Food, Slow Cities and Slow Sex movement, Honore's entertaining investigation reveals how we can live more productive, fulfilling lives by embracing the philosophy of Slow.

In the tradition of such trailblazing books as No Logo and The Tipping Point, In Praise of Slow heralds a growing international movement of people dedicated to slowing down the pace of our contemporary times and enjoying a richer, fuller life as a result.

These days, almost everyone complains about the hectic pace of their lives. We live in a world where speed rules and everyone is under pressure to go faster. But when speed is king, anyone or anything that gets in our way, that slows us down, becomes an enemy. Thanks to speed, we are living in the age of rage.

Carl Honore has discovered a movement that is quickly working its way into the mainstream. Groups of people are developing a recipe for living better in a fast-paced, modern environment by striving for a new balance between fast and slow. In an entertaining and hands-on investigation of this new movement, Honore takes us from a Tantric sex workshop in a trendy neighbourhood in London, England to Bra, Italy, the home of the Slow Food, Slow Cities and Slow Sex movements. He examines how we can continue to live productive lives by embracing the tenets of the slow movement.

A challenging take on the cult of speed, as well as a corrective look at how we can approach our lives with new understanding, In Praise of Slow uncovers a movement whose time has come.

Carl Honore was born in 1967 and is a freelance journalist based in London. He has written for the Economist, Observer, National Post and the Houston Chronicle.