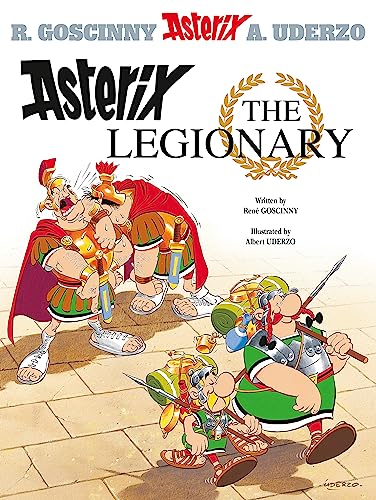 It’s off to the wars for Asterix and Obelix: they’ve enlisted as legionnaires in order to rescue Tragicomix, whom the Romans forcibly conscripted. The two find Tragicomix and succeed in causing the biggest commotion ever on a battlefield.

Rene Goscinny was born in Paris in 1926, and spent most of his childhood in Argentina, before eventually moving to Paris in 1951. He died in 1977. Albert Uderzo was born in 1927 in a small village in Marne, France. He met Rene Goscinny in 1951 and on 29 October 1959 their most famous creation, Asterix, made his first appearance on page 20 of Pilote. ASTERIX THE GAUL, their first album, was published in 1961 and there have now been 35 Asterix albums.

It is almost impossible to single out one album from this remarkable comic book series, but Legionary comes closest to perfection. A masterclass in comedy to read again and again―Robin Etherington, The Big Issue

Book Description 2004. Paperback. Condition: New. Paperback. Gaul was divided into three parts. No, four parts - for one small village of indomitable Gauls still held out against the Roman invaders. BOOK 10 Asterix and Obelix enlist in the Roman arm.Shipping may be from multiple locations in the US or from the UK, depending on stock availability. 48 pages. 0.376. Seller Inventory # 9780752866215