Items related to An Earful of Horrid Henry

An Earful of Horrid Henry 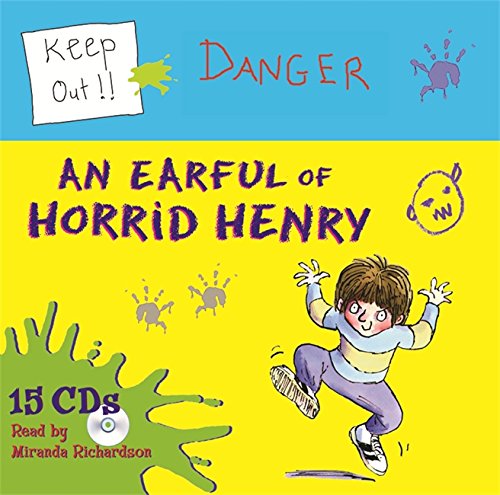 The first 15 Horrid Henry CDs in one collectable box. 60 stories in total ! Some car journey!

Francesca Simon spent her childhood on the beach in California, and then went to Yale and Oxford Universities to study medieval history and literature. She now lives in London with her English husband and their son. When she is not writing books she is doing theatre and restaurant reviews or chasing after her Tibetan Spaniel, Shanti. Miranda Richardson has appeared in films such as THE HOURS, SLEEPY HOLLOW, THE CRYING GAME, EMPIRE OF THE SUN and HARRY POTTER AND THE GOBLET OF FIRE. TV work includes A DANCE TO THE MUSIC OF TIME, JACKANORY, Queen Elizabeth in BLACKADDER and Queen Mary in THE LOST PRINCE. She won Spoken Word awards in 2002 and 2003 for her inspired readings of HORRID HENRY AND THE SECRET CLUB and HORRID HENRY'S STINKBOMB audiobooks for Orion.

1. An Earful of Horrid Henry

Book Description Orion (an Imprint of The Orion P, 2007. Audio CD. Condition: Good. Connecting readers with great books since 1972. Used books may not include companion materials, some shelf wear, may contain highlighting/notes, may not include cdrom or access codes. Customer service is our top priority!. Seller Inventory # S_261008160