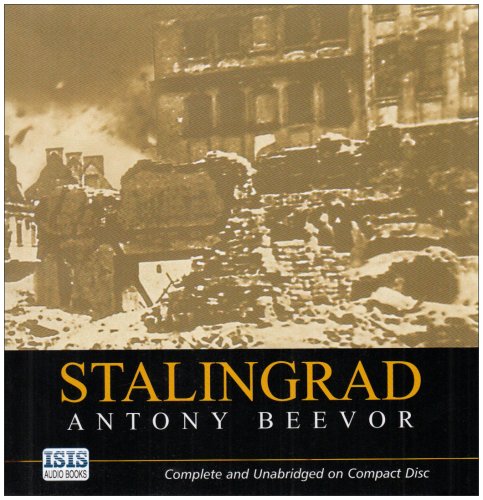 Winner of three major history prizes and national bestseller Hitler had boasted that with his powerful Sixth Army he could 'storm the heavens'. But then, in a sudden encirclement, over a quarter of million men were suddenly trapped. Stalingrad marked not just the psychological turning-point of the Second World War, but was the first major modern battle fought in a city with thousands of helpless civilians caught up in its horrors. In this titanic struggle between Stalin and Hitler, men were driven beyond the limits of physical and mental endurance. This fresh account, written as a narrative, concentrates on the experience of the soldiers from both sides. It is an unforgettable story.

Hitler made two fundamental and crippling mistakes during the Second World War: The first was his whimsical belief that the United Kingdom would eventually become his ally, which delayed his decision to launch a major invasion of Britain, whose army was unprepared for the force of blitzkrieg warfare. The second was the ill-conceived Operation Barbarossa--an invasion of Russia that was supposed to take the German army to the gates of Moscow. Antony Beevor's thoughtfully researched compendium recalls this epic struggle for Stalingrad. No one, least of all the Germans, could foretell the deep well of Soviet resolve that would become the foundation of the Red Army; Russia, the Germans believed, would fall as swiftly as France and Poland. The ill-prepared Nazi forces were trapped in a bloody war of attrition against the Russian behemoth, which held them in the pit of Stalingrad for nearly two years. Beevor points out that the Russians were by no means ready for the war either, making their stand even more remarkable; Soviet intelligence spent as much time spying on its own forces--in fear of desertion, treachery, and incompetence--as they did on the Nazis. Due attention is also given to the points of view of the soldiers and generals of both forces, from the sickening battles to life in the gulags.

Many believe Stalingrad to be the turning point of the war. The Nazi war machine proved to be fallible as it spread itself too thin for a cause that was born more from arrogance than practicality. The Germans never recovered, and its weakened defenses were no match for the Allied invasion of 1944. We know little of what took place in Stalingrad or its overall significance, leading Beevor to humbly admit that "[t]he Battle of Stalingrad remains such an ideologically charged and symbolically important subject that the last word will not be heard for many years." This is true. But this gripping account should become the standard work against which all others should measure themselves. --Jeremy Storey

Antony Beevor is the author of Crete: The Battle and the Resistance (Runciman Prize), Stalingrad (Samuel Johnson Prize, Wolfson Prize for History and Hawthornden Prize), Berlin: The Downfall, The Battle for Spain (Premio La Vanguardia), D-Day: The Battle for Normandy (Prix Henry Malherbe and the RUSI Westminster Medal), The Second World War, and Ardennes 1944 (shortlist Prix Medicis). The Number One bestselling historian in Britain, Beevor's books have appeared in thirty-two languages and have sold just over seven million copies. A former chairman of the Society of Authors, he has received a number of honorary doctorates. He is also a visiting professor at the University of Kent and an Honorary Fellow of King's College, London. He was knighted in 2017.