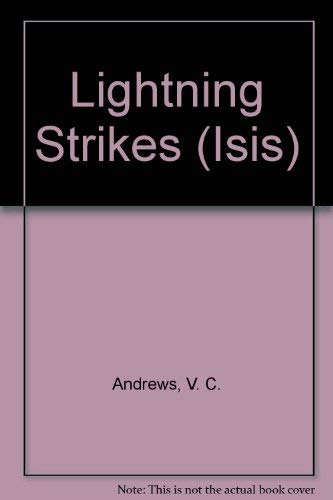 The second in the Hudson series. Rain has been searching for a place to call home, but there's nowhere to hide when the night sky lights up with terror... Enrollded in one of England's most prestigious drama schools, Rain Arnold is sent to live with her great-aunt Lenora, of the renowned Endfield family. But something is not right. Rain hears footsteps at night and the high-pitched laughter of a little girl. She sees light in rooms that are supposed to be locked. And everything about the place - the air, the silence, even the sombre household staff - is as cold and soulless as a museum. She senses that behind the icy sheen of wealth and privelege lies something unspeakable. Something that could turn Rain's most precious dreams into inescapable nightmare.

One of the most popular authors of all time, V. C. Andrews (1923-1986) is the author of the bestselling Dollanganger family saga, which began with Flowers in the Attic and includes Petals on the Wind, If There Be Thorns, Seeds of Yesterday, and Garden of Shadows.

Chapter One: A Grand Adventure

Grandmother Hudson sat there with an I-told-you-so smile on her face at the breakfast table after I returned from speaking with my mother on the phone.

"Well?" she asked when I sat in silence. I knew she wanted to hear she had been right. Spitefully, I wanted to keep her waiting. Actually, my reluctance to speak was more out of my own pain. No matter how brave a face I put on, I was still disappointed.

"She's not coming," I said quickly, my eyes downcast. "She says the attorney general is having them over for dinner. I'm supposed to call her if you dare make plans to go with me to England."

"I should go just for that," Grandmother Hudson said like a petulant little girl. "Have you packed everything?"

She slid a long white envelope over the table to me.

"Extra spending money. I don't expect my sister will buy you anything you need. It's a bank draft, so soon after you arrive, ask Leonora to direct you to her bank and have it deposited. You know, of course, all the money will be changed to English pounds?"

"You'll have to learn the exchange rate so you understand what things will cost. Of course you'll speak the same language," she continued, "but there are many differences. My sister has become an Anglophile. She has an accent and all, although there were times even recently when I caught her sounding more like an American. It will take a little getting used to, but that will be part of the adventure." She paused, sat back and sighed. "I wish I was your age, going off somewhere. I feel like I've been chained to this chair and imprisoned by my own traitorous heart," she moaned.

"You've told me many times that you did a great deal of traveling and that you enjoy not having to drag off somewhere," I reminded her.

"Yes, we did travel quite often until Everett became ill." She paused, looking thoughtful for a moment and then smirked at me. "No one told you that you have to memorize every last word I utter in this house and then throw them back at me."

I laughed at her and she smiled, wagging her head. Then she grew serious again.

"I should tell you a little about my sister Leonora and her husband Richard," she said sitting forward. "You already know he is a barrister, and Leonora will be the first to tell you how important he is. They live in a fancy part of London, Holland Park. I've actually only been there twice, once for a visit and once...for a funeral."

"They lost their only child Heather. She was seven at the time."

"How horrible. How did she die?"

"She was born with a defective heart valve and corrective surgery didn't solve the problem. One morning, they found she'd died in her sleep. It was very sad."

"What did you tell your sister about me?" I asked.

"What everyone else believes. It's better for us to leave it that way. My sister isn't as liberal minded as I am. For now, she thinks you're going there to live and help with the domestic chores while you attend the drama school. Since they have a maid, a cook, a butler and a chauffeur, I'm sure there won't be all that much for you to do. She's certainly not going to give up her maid and assign her duties to you. Having a team of servants is too much of a status symbol to Leonora."

"I know." She smiled and then her face turned somber to add, "It's not the work that will be hard. However, I wouldn't have agreed to send you over if I didn't feel you would do well, Rain. Mr. MacWaine will take good care of you, and I do hope to get there myself someday soon, despite my oppressive physician."

I nodded. I really did hope she would.

Later in the day while I was writing a letter to Roy, I heard Victoria come into the house. I could always tell when it was Victoria. Her heels tapped down on the tile floor like tiny hammers when she walked. Her steps were deliberate, each one falling with a vengeance. I suppose I could say she didn't walk as much as she marched, her long legs striding forcefully as her bony shoulders turned.

I could hear her voice, barely muffled behind Grandmother Hudson's closed door.

"I just learned of the expense of this ridiculous trip to England you're sponsoring, Mother. On top of it all, you're sending her first class?"

"That's me. I'm your daughter. I run the affairs here. I should travel first class. That...girl is a family disgrace, someone to hide, not blatantly wave about as if we're all so proud my sister had an illegitimate child with a black man. Daddy would turn over in his grave. He didn't even travel first class!"

"Your father never took advantage of his money. I never understood the reason for making it if you don't enjoy it," Grandmother Hudson said calmly.

"Exactly my point. She didn't make it, did she?"

"When will you understand that what I do with my money is my business, Victoria? We've had this conversation ad nauseam. If you want to be thrifty, be so with your own money and leave me alone."

"I saw how much that school is costing, too," Victoria said, ignoring Grandmother Hudson's wishes. "It's ridiculous to assume she has any talent on the basis of a school play. Conor MacWaine is robbing us. He probably enjoys taking advantage of stupid Americans."

"Are you calling me stupid?"

"It's not very bright to spend forty thousand dollars on...on that girl becoming an actress."

"I'm not finished. I want to know when you're calling your attorney about the will, Mother."

"I told you what I've done I will not undo. When you make up your own will, you can leave her out."

"What?" Victoria's laugh was more like a thin squeal. "You don't think I'll ever include her in my will, do you? Oh, what's the use? I'm wasting my breath."

"Finally, you say something intelligent."

"Everyone shouldn't depend on me keeping my mouth shut forever about this, Mother. One of these days..."

"You'll do nothing," Grandmother Hudson snapped. "If you so much as suggest..."

"It's not right and it's...unhealthy to be coddling her like this. Megan should be ashamed of what she has done to the rest of us."

It grew quiet and then a few moments later, Victoria emerged from the room and stomped out of the house. I hoped she had marched out of my life. She was so bitter, with her teeth clenched all the time and her eyebrows turned in like someone with a continuous headache. She seemed to take pleasure in nothing. I didn't think she even liked herself, much less me. I imagined she lived in a house without mirrors so she could avoid looking at herself.

When I saw Grandmother Hudson later in the day, I didn't mention hearing any of the conversation between her and Victoria. I was sure she wanted me to forget it as quickly as she apparently did. She enjoyed so little in the way of pleasure from her children and grandchildren. It made me reconsider what it means to be rich and to be poor.

Just as he had promised, Jake was there early the next morning. We had barely finished breakfast when he arrived. After he stepped into the dining room, I realized I rarely, if ever, had seen Jake in the house. Occasionally he would bring in groceries or whatever packages had to be carried, but usually he waited outside by the car. This morning he looked spiffy. His uniform was cleaned and pressed and the brim of his cap glittered in the light of the chandelier.

"Morning, ladies," he declared as he took a tiny bow. "I am here to fetch the princess and her things for her journey to the Old World."

"Don't make a fool of yourself this early in the morning, Jake Marvin," Grandmother Hudson warned. She glanced quickly at me and then straightened with a military posture in her chair. "Everyt

Shipping: US$ 10.92
From United Kingdom to U.S.A.
Destination, rates & speeds