Items related to The Cat Who Ate Danish Modern

The Cat Who Ate Danish Modern 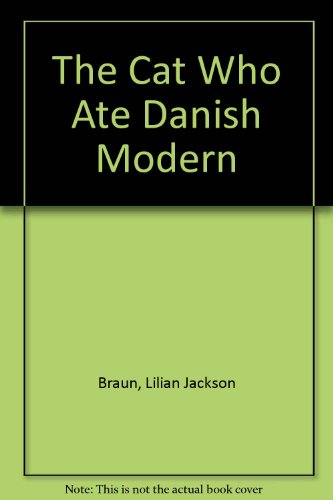 Jim Qwilleran is not exactly overwhelmed by his new assignment for the Daily Fluxion. Interior design has never been one of his specialties and now he's supposed to turn out an entire magazine on the subject every week! But the first issue of Gracious Abodes is barely off the presses when Qwilleran finds himself back on more familiar territory--the exclusive residence featured on the cover has been burglarized and the lady of the house found dead...now Qwilleran and Koko--the brilliant Siamese--have their respective moustache and whiskers twitching, and when Koko starts pawing clues in the dictionary and sniffing designer furniture, Qwilleran finds himself doing a feature on a very clever murder.

The history of Lilian Jackson Braun is perhaps as exciting and mysterious as her novels. Between 1966 and 1968, she published three novels to critical acclaim: The Cat Who Could Read Backwards, The Cat Who Ate Danish Modern, and The Cat Who Turned On and Off.  In 1966, the New York Times labeled Braun, “the new detective of the year.” Then, for reasons unknown, the rising mystery author disappeared from the publishing scene. It wasn’t until 1986 that Berkley Publishing Group reintroduced Braun to the public with the publication of an original paperback, The Cat Who Saw Red. Within two years, Berkley released four new novels in paperback and reprinted the three mysteries from the sixties. Since then, G.P. Putnam’s Sons has published seventeen additional novels in the Cat Who series. Braun passed away in 2011.