Items related to Math: A Book You Can Count On! (Basher Basics)

Basher, Simon; Green, Dan Math: A Book You Can Count On! (Basher Basics)

Math: A Book You Can Count On! (Basher Basics) 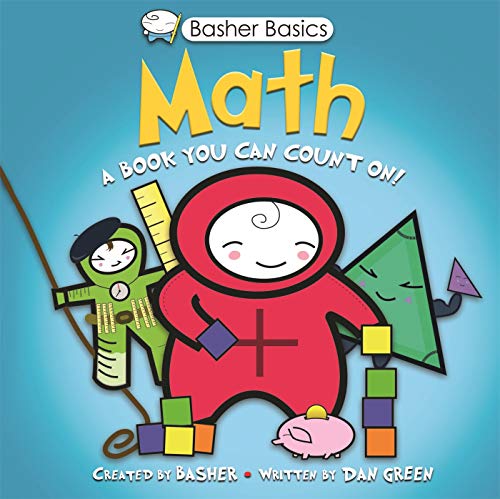 Meet Zero, a bubbly fellow who will dissolve you to nothing, and say hello to the all-action Units, who just love to measure. Get a load of greedy Multiply, a big guy who hoards numbers together, and stand amazed by mysterious Pi, who goes on and on and on . . . to Infinity! Multiply your number know-how with Basher’s unique one-stop guide to the building blocks of mathematics. Packed with top tips and memorable characters, this is an essential book for students ages 8 and up. Book Details:Format: PaperbackPublication Date: 7/6/2010Pages: 64Reading Level: Age 8 and Up

Simon Basher is the creator and illustrator of The Periodic Table, Physics, Biology, and Astronomy. His characters bridge the gap between edgy Manga and the cuteness of Hello, Kitty!

Dan Green studied Natural Sciences at Cambridge University. Since graduating, he has written and edited many popular science titles and humorous books, become the editor of a South American national newspaper, worked as a travel writer, as well as developing and editing the wildly successful Horrible Science magazine collection. He is the "voice" of Basher's bestselling science-made-easy books, and to date has written nine titles in the series.

Gr 4-8–Two new titles follow the format of Green and Basher's Physics and Biology (both Kingfisher, 2008) and other visually appealing introductions to the sciences. Chemistry begins with a short overview of the discipline and information on Antoine Lavoisier's 18th-century scientific findings. Concepts are grouped by associations: “Basic States” (solid, liquid, etc.), “Nuts and Bolts” (atom, ion, etc.), “Nasty Boys” (acid, base, etc.), and more. The individual concepts are each introduced over a spread that features a computer-generated cartoon of a character representing the idea and a brief introduction to its characteristics and personality. Math follows a similar format, but without an introduction. Chapters include, among others: “Number Bunch” (zero, infinity, etc.), “Special Sum-Things” (add, subtract, etc.), and “Shape Shifters” (line, angle, etc.). In both books, the information is presented in a chatty, first-person voice. For example, “Acid” announces: “The most notorious of the Nasty Boys. I'm mad, bad, and thoroughly dangerous to know. Given the chance, I'll eat away at Metal and burn through your skin!” Other basic facts are provided in bullet points and small boxed areas. Thee worthwhile library purchases would make handy curriculum supplements.–Maren Ostergard, King County Library System, Issaquah, WAα(c) Copyright 2010. Library Journals LLC, a wholly owned subsidiary of Media Source, Inc. No redistribution permitted.

1. Basher Basics: Math: A Book You Can Count On