Items related to Anyway Anyhow Anywhere: The Complete Chronicle of the...

Kent-matthew-neill-andy Anyway Anyhow Anywhere: The Complete Chronicle of the " Who " 1958-1978 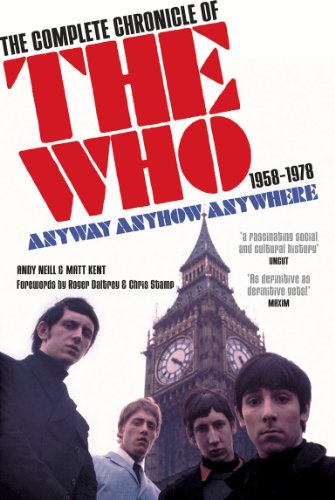 The Who redefined rock--and these day-to-day diaries brim with authentic details about the band's career, right up until drummer Keith Moon's tragic death. The authors gained rare access to official archives, many not viewed before; to friends and associates (some who had never spoken publicly about the group); and to Pete, Roger, and John themselves. Three hundred photos capture the historic band, and the diaries recount club dates, TV appearances, auditions, and recordings. Every Who fan will cherish this!

Although the Who was one of the most popular British rock bands of the 1960s and '70s, it hasn't been documented as thoroughly as such others as the Beatles and the Rolling Stones. Now it is, thanks to indefatigable researchers Neill and Kent, who go beyond what the fans are familiar with into the obsessive detail of a day-by-day chronicle listing concerts, recording sessions, record releases, and other events, illustrated by copious photographs and other memorabilia. The book begins in the late '50s, when the band's musicians began playing together in "trad jazz" bands, and continues to the phenomenal success of their groundbreaking rock opera Tommy and subsequent emergence as one of the world's most popular acts, filling stadiums on both sides of the Atlantic. Neill and Kent wisely wrap things up with the death of drummer Keith Moon in 1978. Many feel the band should have done the same thing, but it continues performing to huge crowds of loyal fans who will appreciate this painstaking chronicle. Gordon Flagg
Copyright © American Library Association. All rights reserved

6. Anyway Anyhow Anywhere: The Complete Chronicle of the " Who " 1958-1978 [Paperback] kent-matthew-neill-andy

7. Anyway Anyhow Anywhere: The Complete Chronicle of the " Who " 1958-1978 [Paperback] kent-matthew-neill-andy