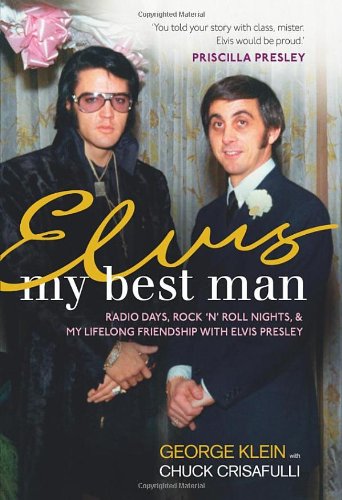 GEORGE 'GK' KLEIN is a Memphis native and a pioneering disc jockey and television host. He and Elvis met in the eighth grade at Humes High in North Memphis, and they became lifelong friends. Today, Klein hosts a program for Sirius XM Radio's Elvis channel, Memphis Sounds for WYPL-18 TV, and the Elvis Hour for WMC radio in Memphis, where he lives with his wife, Dara. He misses Elvis every day. CHUCK CRISAFULLI is a veteran entertainment journalist and author, most recently of Go to Hell: A Heated History of the Underworld, and Me and a Guy Named Elvis, with Jerry Schilling.

Klein’s paean is awfully sincere but, in its folksy naiveté, oddly fetching. Maybe it’s the bio the King would have most wanted. Klein, who met Elvis in eighth grade, has been in the music business most of his life. He hosted early rock shows on Memphis radio and TV, was close at hand during Elvis’ early career, and remained a member of the inner circle to the end. Since then, he has hosted various Elvis-related radio shows and produced an Elvis documentary, and been interviewed by the likes of Larry King, Oprah, and Geraldo Rivera. He recalls a 1955 colloquy in which he suggested Elvis had already risen to such heights that he was “competition” for “Webb Pierce and Ferlin Husky and Hank Snow.” Tellingly, Presley “shook his head and let out a little snort of a laugh. ‘No, George, I’m shooting for Bill Haley,’” he replied. Soon enough, Elvis was at the top of the pop as well as the country charts, and Bill Haley was looking for a new hook. --Mike Tribby

Shipping: US$ 6.77
From United Kingdom to U.S.A.
Destination, rates & speeds

Book Description Virgin Books, 2010. Hardcover. Condition: Good. A slight tan to page edges Good condition is defined as: a copy that has been read but remains in clean condition. All of the pages are intact and the cover is intact and the spine may show signs of wear. The book may have minor markings which are not specifically mentioned. Most items will be dispatched the same or the next working day. Seller Inventory # wbb0013380491

Book Description Hardback. Condition: Very Good. The book has been read, but is in excellent condition. Pages are intact and not marred by notes or highlighting. The spine remains undamaged. Seller Inventory # GOR003958845

Book Description Hardback. Condition: Good. The book has been read but remains in clean condition. All pages are intact and the cover is intact. Some minor wear to the spine. Seller Inventory # GOR006094710

Book Description Virgin Books. Hardcover. Condition: Good. Item is in good condition. Some moderate creases and wear. This item may not come with CDs or additional parts including access codes for textbooks. Might be an ex-library copy and contain writing/highlighting. Seller Inventory # DS-0753539500-3