Items related to Americana: The Kinks, the Road and the Perfect Riff

Ray Davies Americana: The Kinks, the Road and the Perfect Riff

Americana: The Kinks, the Road and the Perfect Riff 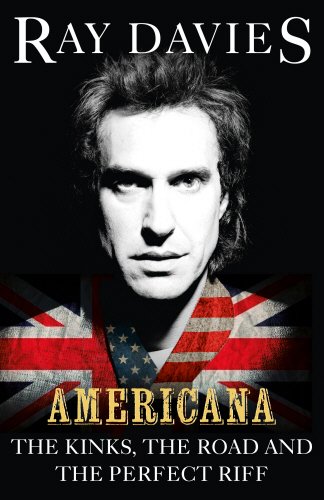 As a boy in post-War England, legendary Kinks' singer/songwriter Ray Davies was fascinated by America—ts movies and music, its culture of freedom, fed his imagination. Then, as part of the British Invasion, he toured the US with the Kinks during one of the most tumultuous eras in recent history—until the Kinks were banned from performing there from 1965-69. Many tours and trips later, he experienced a transformative event in New Orleans when he was shot during a botched robbery. From his quintessentially English perspective as songwriter for the Kinks, Davies explores in Americana his feelings—love, confusion, and fascination—toward the country that both inspires and frustrates him. With candor, humor, and wit, he takes us on a very personal road trip through his life and storied career as a rock writer-performer, and reveals what music, fame, and America really mean to him. Some of the most fascinating characters in recent pop culture make appearances, from the famous to the perhaps even-more-interesting behind-the-scenes players. The book also includes a photographic insert with many images from Davies's own collection.

Iconic rock singer-songwriter Ray Davies inspired generations of musicians—from the Who, the Clash, and the Ramones to Black Sabbath—as lead singer and songwriter of the Kinks. The band's string of international hits include “You Really Got Me,” “All Day and All of the Night,” “Till the End of the Day,” “Come Dancing,” and of course, “Lola.” In 1990, the Kinks were inducted into the Rock and Roll Hall of Fame. Davies has also acted, directed, and produced shows for theater and television. Since the Kinks disbanded he has embarked on a solo career and continues to tour and record. Davies was made a Commander of the Order of the British Empire in 2004, and in 2012, his performance of the Kinks song “Waterloo Sunset” was a highlight of the closing ceremony of the London Olympics. On his most recent album, See My Friends (2011), he collaborated with such artists as Bruce Springsteen, Metallica, and Jon Bon Jovi. Davies was inducted into the Songwriters Hall of Fame in June 2014, and his Kinks-themed stage musical, Sunny Afternoon, is now playing on the West End in London and crowned best new musical at the Olivier Awards in April 2015. It also won Oliviers for best actor and best supporting actor in the musical category, and Ray Davies received a special outstanding achievement award for the Sunny Afternoon score.

"The Kinks frontman published X-Ray, his 'unauthorized autobiography,' in 1994, long before his peers started telling their own tales of decadence and recovery. Americana is alternately a sequel and parallel companion piece to X-Ray, chronicling his later years and his lifelong relationship with the country and culture that inspired him. . . . Davies is candid and honest about his personal and creative struggles. . . . [He writes] 'the immovable "You" is always there, whether you like it or not.'” —The New York Times

1. Americana: The Kinks, the Riff, the Road: A Memoir

Book Description Virgin Books, 2013. Hardcover. Condition: Good. Good condition is defined as: a copy that has been read but remains in clean condition. All of the pages are intact and the cover is intact and the spine may show signs of wear. The book may have minor markings which are not specifically mentioned. Most items will be dispatched the same or the next working day. Seller Inventory # wbb0013137379

2. Americana: The Kinks, the Road and the Perfect Riff

Book Description Virgin Books 03/10/2013, 2013. Hardcover. Condition: Very Good. Shipped within 24 hours from our UK warehouse. Clean, undamaged book with no damage to pages and minimal wear to the cover. Spine still tight, in very good condition. Remember if you are not happy, you are covered by our 100% money back guarantee. Seller Inventory # 6545-9780753555224

3. Americana: The Kinks, the Road and the Perfect Riff

Book Description Virgin Books, 2013. Hardcover. Condition: Good. Connecting readers with great books since 1972. Used books may not include companion materials, some shelf wear, may contain highlighting/notes, may not include cdrom or access codes. Customer service is our top priority!. Seller Inventory # S_268958058

4. Americana: The Kinks, the Road and the Perfect Riff

Book Description Virgin Books, 2013. Condition: Good. A+ Customer service! Satisfaction Guaranteed! Book is in Used-Good condition. Pages and cover are clean and intact. Used items may not include supplementary materials such as CDs or access codes. May show signs of minor shelf wear and contain limited notes and highlighting. Seller Inventory # 0753555220-2-4

5. Americana: The Kinks, the Road and the Perfect Riff

Book Description -. Hardcover. Condition: Very Good. Americana: The Kinks, the Road and the Perfect Riff This book is in very good condition and will be shipped within 24 hours of ordering. The cover may have some limited signs of wear but the pages are clean, intact and the spine remains undamaged. This book has clearly been well maintained and looked after thus far. Money back guarantee if you are not satisfied. See all our books here, order more than 1 book and get discounted shipping. Seller Inventory # 7719-9780753555224

6. Americana : The Kinks,The Road and The Perfect Riff - Signed / Dated

Shipping: US$ 19.56
From United Kingdom to U.S.A.
Destination, rates & speeds