Items related to The slave trade : the history of the Atlantic slave... 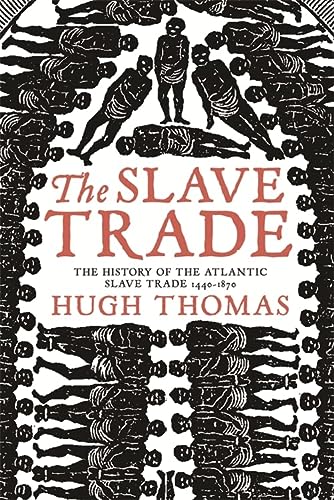 The Atlantic slave trade was one of the largest and most elaborate maritime and commercial ventures. Hugh Thomas follows the development of this massive shift of human lives across the centuries until the slave trade's abolition in the late 19th century.

The Slave Trade is a massive (900-page) book that attempts to document the entire history of the Atlantic slave trade, a sordid business that somehow prospered for more than four centuries. As the sheer heft of the book might indicate, the story is complicated. Much of the extensive research conducted by Hugh Thomas relates to rivalries both in Europe and Africa. Those who wonder how slavery could have existed in the United States may find revelatory the moral ambiguity of how the business of transporting slaves was conducted.

Hugh Thomas has written numerous histories on the Spanish speaking world, including The Spanish Civil War, for which he won the Somerset Maugham Prize in 1962, Cuba or the Pursuit of Freedom, The Conquest of Mexico and The Slave Trade. His book The Unfinished History of the World won the first National Book Award for History in 1980. Hugh Thomas was chairman of the Centre for Policy Studies 1979-89 and was awarded a peerage as Lord Thomas of Swynnerton in 1981.

Book Description Phoenix, 2006. Condition: Good. A+ Customer service! Satisfaction Guaranteed! Book is in Used-Good condition. Pages and cover are clean and intact. Used items may not include supplementary materials such as CDs or access codes. May show signs of minor shelf wear and contain limited notes and highlighting. Seller Inventory # 0753820560-2-4

Book Description Phoenix, 2006. Paperback. Condition: Good. Item may show signs of shelf wear. Pages may include limited notes and highlighting. May include supplemental or companion materials if applicable. Access codes may or may not work. Connecting readers since 1972. Customer service is our top priority. Seller Inventory # mon0002135270

Book Description Phoenix, 2006. Paperback. Condition: Good. Connecting readers with great books since 1972. Used books may not include companion materials, some shelf wear, may contain highlighting/notes, may not include cdrom or access codes. Customer service is our top priority!. Seller Inventory # S_280164225

Book Description Phoenix, 2006. Paperback. Condition: Good. A few small marks to page edges Good condition is defined as: a copy that has been read but remains in clean condition. All of the pages are intact and the cover is intact and the spine may show signs of wear. The book may have minor markings which are not specifically mentioned. Most items will be dispatched the same or the next working day. Seller Inventory # wbb0013577325