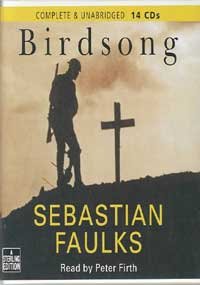 A bestseller in Britain for nearly a year, this novel about the horror and passion of World War I is destined to be compared to classics such as All Quiet on the Western Front and A Farewell to Arms. "An extremely good novel, and a considerable addition to the fin-de-siecle flowering of first world war literature."--Penelope Lively, The Spectator (London).

Readers who are entranced by the sweeping Anglo sagas of Masterpiece Theatre will devour Birdsong, Sebastian Faulks's historical drama. A bestseller in England, there's even a little high-toned erotica thrown into the mix to convince the doubtful. The book's hero, a 20-year-old Englishman named Stephen Wraysford, finds his true love on a trip to Amiens in 1910. Unfortunately, she's already married, the wife of a wealthy textile baron. Wrayford convinces her to leave a life of passionless comfort to be at his side, but things do not turn out according to plan. Wraysford is haunted by this doomed affair and carries it with him into the trenches of World War I. Birdsong derives most of its power from its descriptions of mud and blood, and Wraysford's attempt to retain a scrap of humanity while surrounded by it. There is a simultaneous description of his present-day granddaughter's quest to read his diaries, which is designed to give some sense of perspective; this device is only somewhat successful. Nevertheless, Birdsong is an unflinching war story that is bookended by romances and a rewarding read.

Birdsong was voted one of the best books of the century in a poll conducted by Waterstone's booksellers and Channel Four TV in the United Kingdom. Here's a selection of the praise that has been pouring in:

"Birdsong moved me more profoundly than anything I've read in years ... A deeply compassionate, utterly thrilling work by a master of the form."
-- Frank Conroy

"The accounts of combat are among the finest I have ever read ... so powerful as to be almost unbearable ... a tribute to the author's remarkable skill and tact and dazzling virtuosity."
-- Los Angeles Times

"Superb storytelling and craftsmanship ... a tribute to the durability of the human soul."
-- People

"Vividly imagined ... this strenuous and poignant effort to shore up memory deserves our gratitude."
-- Newsday