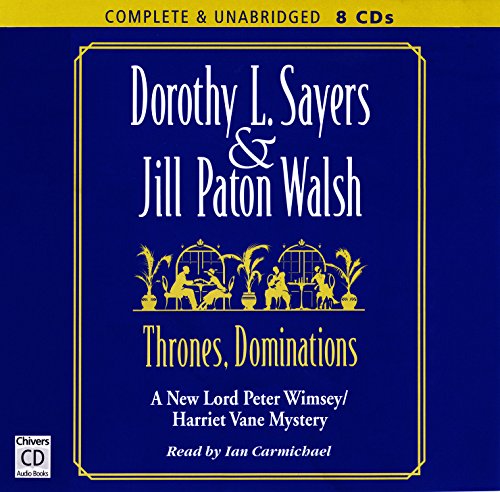 Lord Peter Wimsey and his wife Harriet Vane are settling into their new life together in 1930s London. But when murder strikes in their own social circle, Harriet becomes drawn into a very unexpected case.Dorothy L. Sayers began writing Thrones, Dominations in 1936. Pressure of work led her to set it aside and later the trustees of the Sayers estate asked Jill Paton Walsh to complete it. The result is worthy of the mistress of the golden age of the crime novel.

Asked by her new husband, the gentleman detective Lord Peter Wimsey, why she is having trouble writing her latest mystery novel, Harriet Vane explains, "When I needed the money, it justified itself. It was a job of work, and I did it as well as I could, and that was that. But now, you see, it has no necessity except itself. And, of course, it's hard; it's always been hard, and it's getting harder. So when I'm stuck I think, this isn't my livelihood, and it isn't great art, it's only detective stories. You read them and write them for fun." Is this a clue to the mystery of why Dorothy L. Sayers put aside her 13th full-length Lord Peter novel in 1938 and never finished it? She had made lots of money, and was much more interested in translating Dante and writing about religion. Or is it another excellent novelist, Jill Paton Walsh, speculating--in a perfect imitation of Sayers's voice--on what might have happened? Walsh was invited by the estate of Sayers's illegitimate son, Anthony Fleming, to finish Thrones, Dominations. She has done a splendid job, certain to please Sayers loyalists on the "dorothyl" listserv as well as those new to the Wimsey canon. Lord Peter has been made much more human and interesting by marriage; Harriet is a wise and acerbic companion; and the story, about the murders of two beautiful young women involved with a theatrical producer, is full of twists and connivance. There's also a fascinating subplot involving the soon-to-abdicate King Edward VII and a country on the brink of World War II. Earlier Wimseys in paperback include The Five Red Herrings, Gaudy Night, Murder Must Advertise, and Unnatural Death. Books in print by Walsh include a mystery called A Piece of Justice and a novel, The Serpentine Cave.

"[Walsh] has done a splendid job-certain to please the legions of Sayers loyalists as well as readers new to the Wimsey canon." --Chicago Tribune